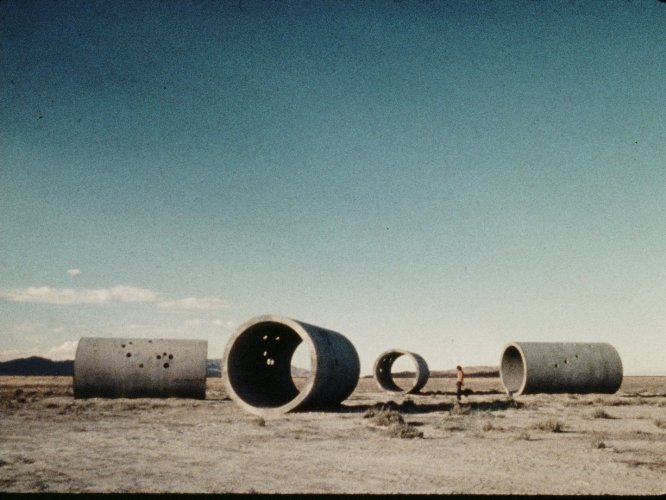 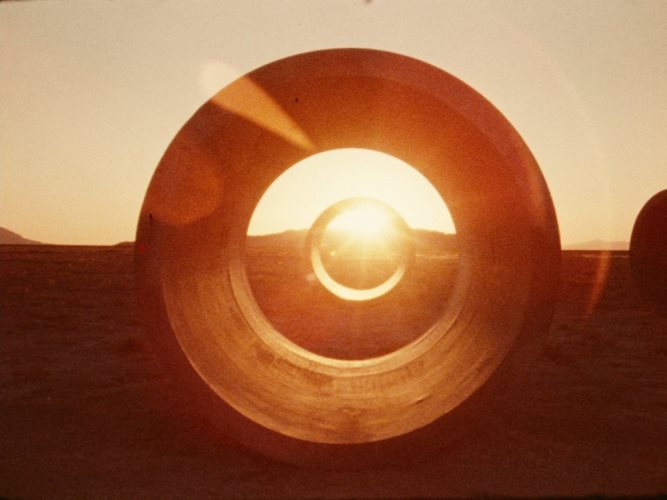 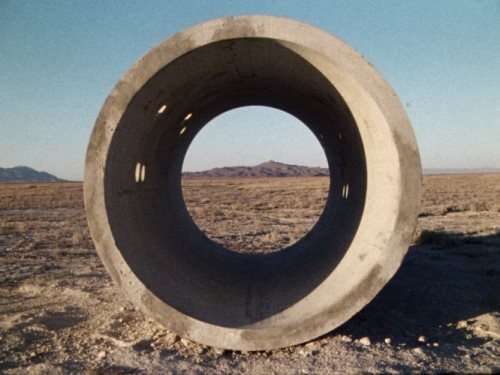 Sun Tunnels documents the making of Nancy Holt‘s major site-specific sculptural work in the northwest Utah desert. Completed in 1976, the sculpture features a configuration of four concrete tubes or “tunnels” that are eight feet long and nine feet in diameter. The tubes are positioned to align with the sunrise and sunset of the summer and winter solstices, and are also pierced by holes that allow light to be cast in patterns of constellations. A kind of American Stonehenge, Sun Tunnels charts the yearly and daily cycles of the sun, and calls attention to human scale and perception within the vast desert landscape. This document includes stunning footage of the changing sun and light as framed by the tunnels on the solstices.

A pioneer of earthworks and public art, Nancy Holt also worked in sculpture, installation, film, video, and photography for over three decades. She is best known for her large-scale environmental sculptural works, including Sun Tunnels in northern Utah and Dark Star Park in Arlington, Virginia. In the 1970s, Holt made a series of pioneering film and video works, including several collaborations with Robert Smithson. Holt‘s early videos, which are among the most iconic works in the medium, explore perception and memory through experiments with point of view and process.

Nancy Holt was born in Worcester, Massachusetts in 1938 and died in 2014. She received a Bachelors degree in Biology from Tufts University, Medford, Massachusetts, in 1960. She received five National Endowment for the Arts Fellowships, two New York Creative Artist Fellowships, a Guggenheim Fellowship, and an Honorary Doctorate from the University of South Florida, Tampa. She produced site-specific environmental works in numerous public places around the world, including Sun Tunnels (1976), a large-scale sculptural work in Great Basin Desert, Utah; Stone Enclosure (Rock Rings) in Bellingham, Washington; Astral Grating (1987) in a New York City subway station, and Dark Star Park, in Arlington, Virginia, among many others. She also completed large-scale land reclamation projects, including Sky Mound (1988) in the New Jersey Meadowlands, and Up and Under (1998), in Nokia, Finland. Holt‘s works, including her films and videos, have been seen in exhibitions at the John Weber Gallery, New York; The New Museum of Contemporary Art, New York; The Whitney Museum of American Art, New York; The Museum of Modern Art, New York; Dia Center for the Arts, New York, and P.S.1 Contemporary Art Center, New York. The solo exhibition Nancy Holt: Photoworks was presented at Haunch of Venison, London, in 2012.

Press Release
Produced by the Foreman Art Gallery with the support of the Canada Council for the Arts, the City of Sherbrooke and the Conseil des arts et des lettres du Québec..