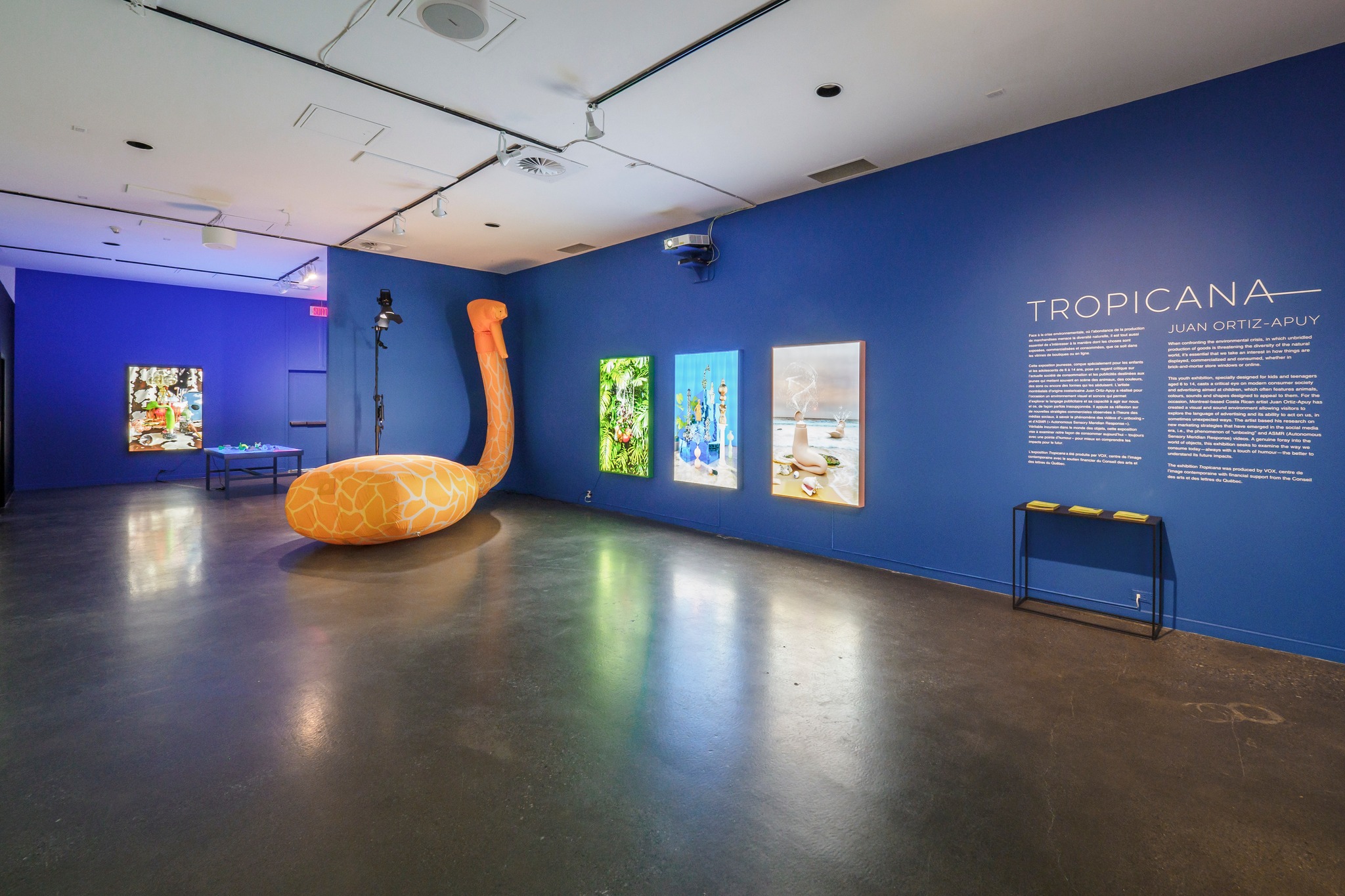 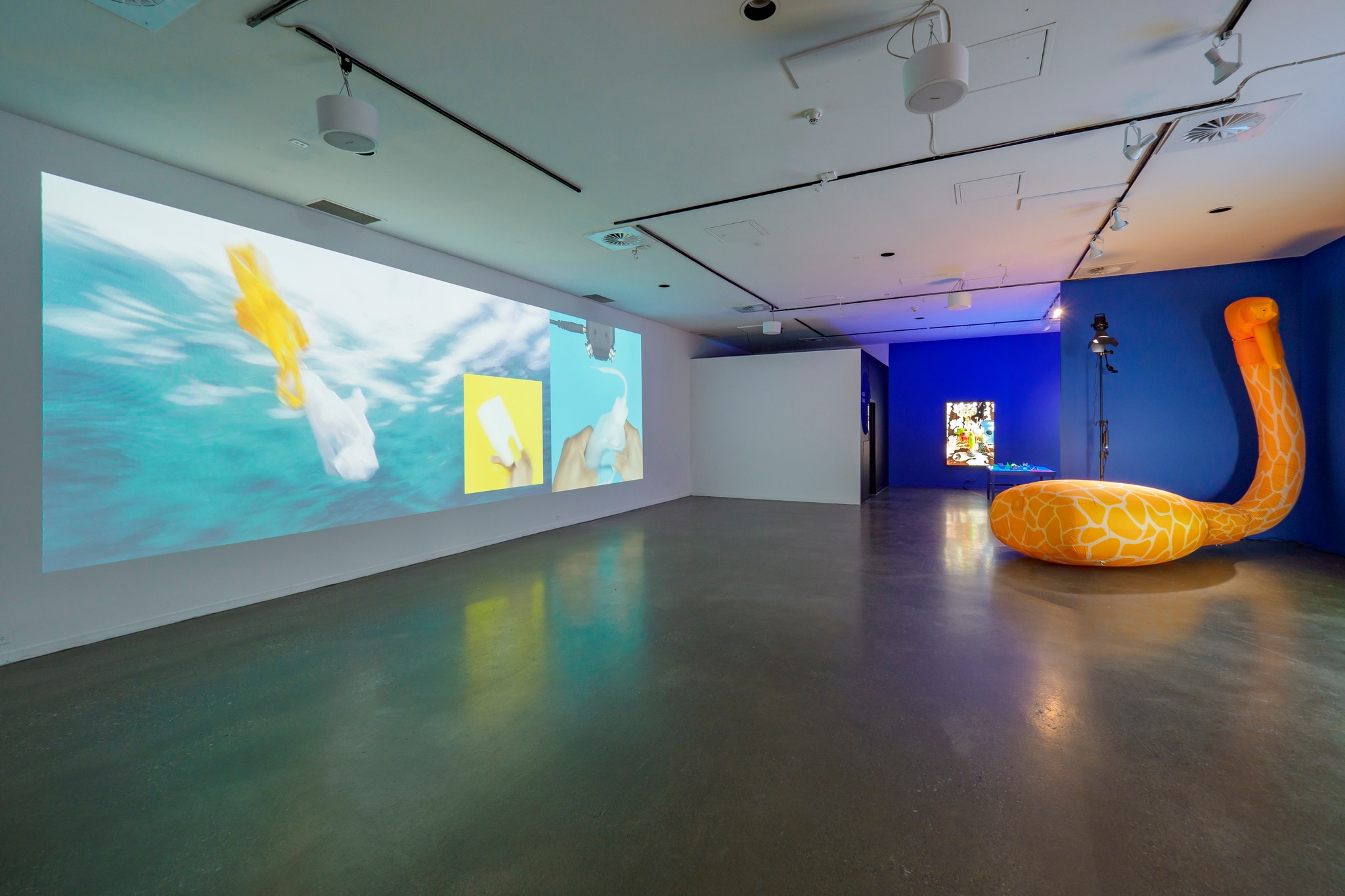 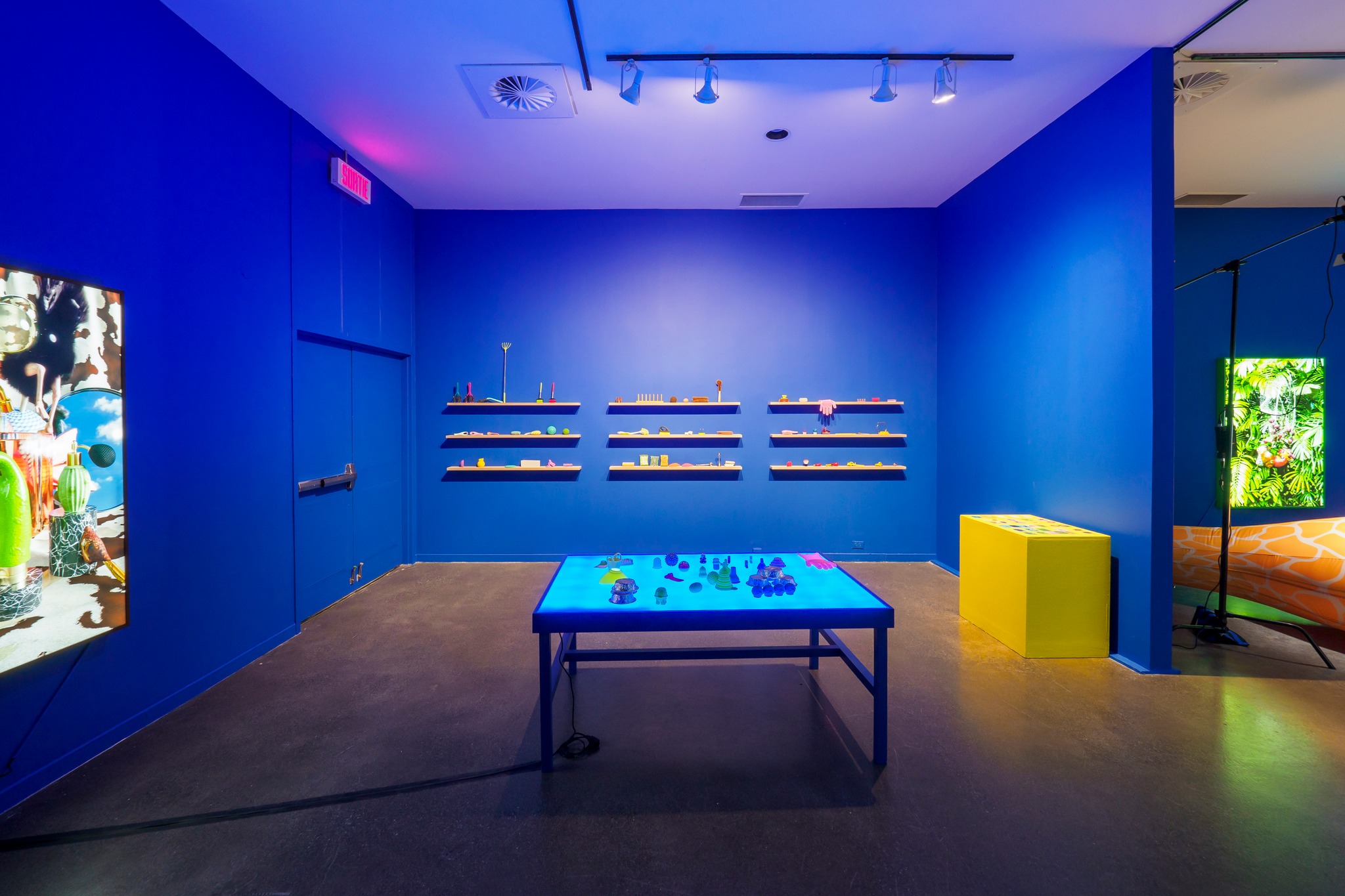 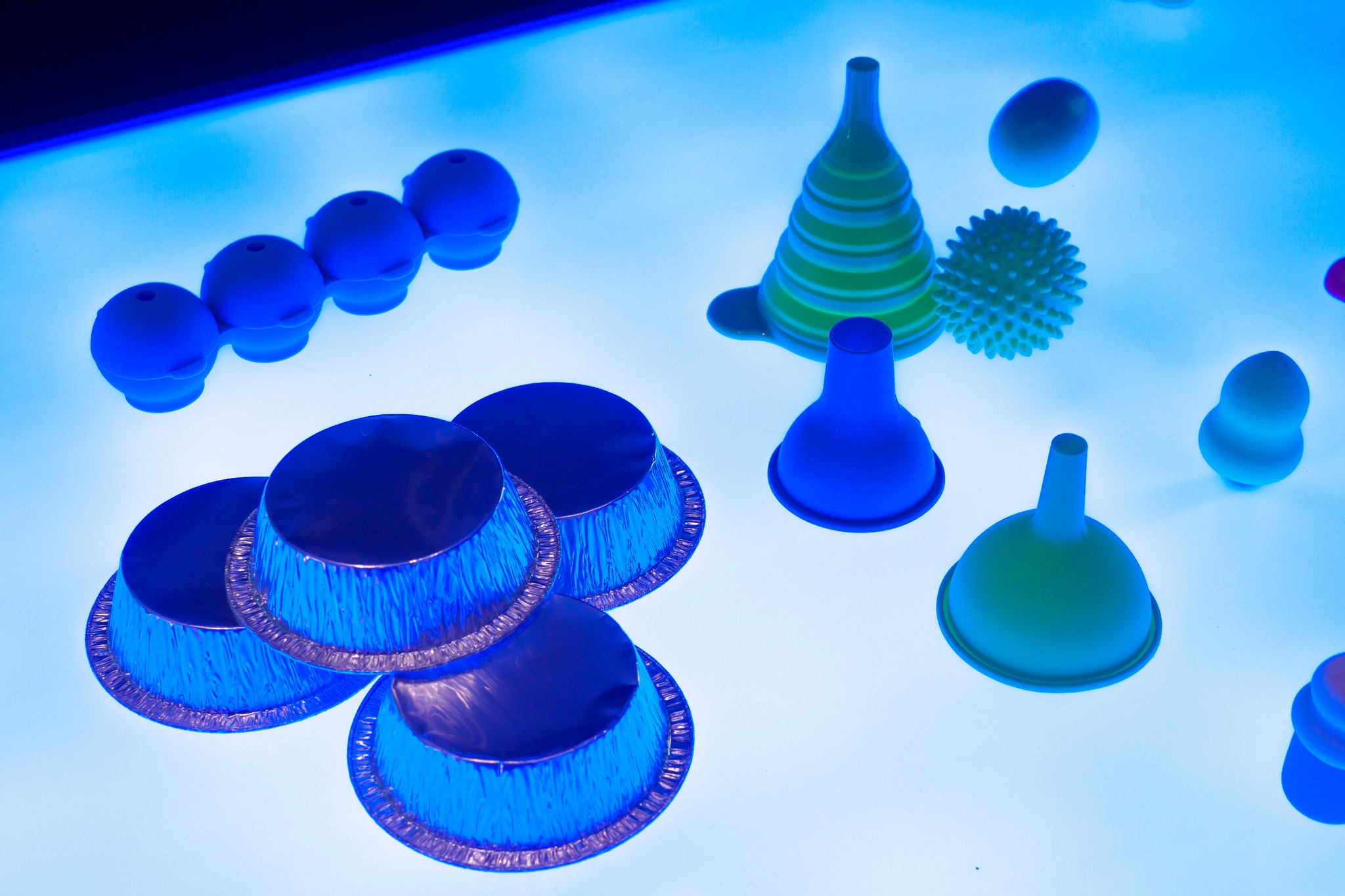 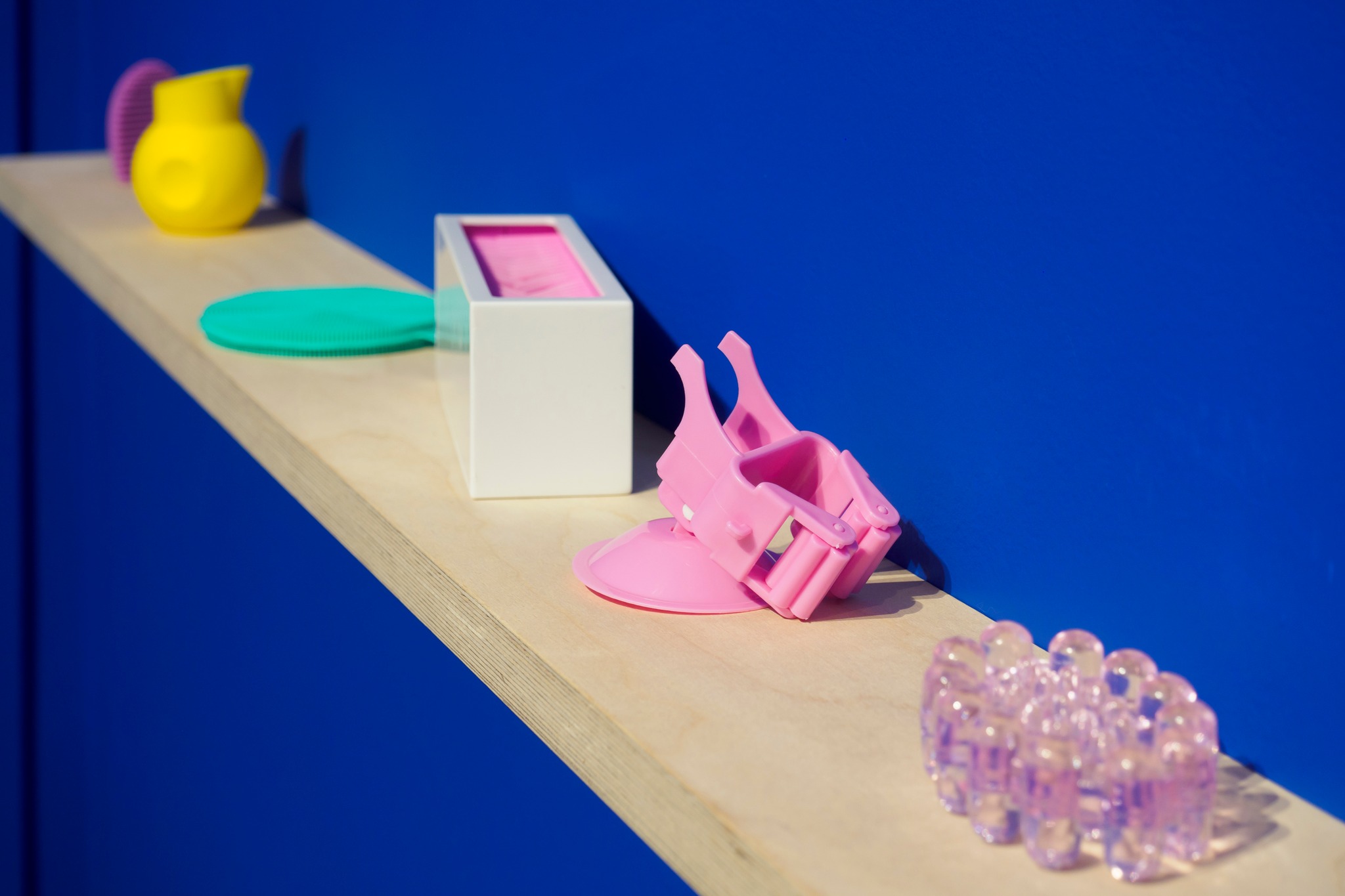 As part of a series dedicated to youth, Juan Ortiz-Apuy invites young visitors to cast a critical eye on our consumer society and its environmental impacts with the exhibition Tropicana. For the occasion, the Montreal-based Costa Rican artist has created a colourful, multidisciplinary installation blending exotic animals, unusual objects, mutant creatures, and vibrant cumbia rhythms. He employs a rich visual and sound environment comprising videos, still images and often strange-looking consumer items to explore the language of advertising as well as the new marketing strategies that have emerged in the social media era.

The accompanying activities are designed to awaken the senses and critical thinking, enabling participants to decode advertising messages and learn how to consume responsibly. In addition to a guided tour, kids have an opportunity to take part in observation games and a workshop designed to deepen their understanding of the issues raised by Ortiz-Apuy.

This exhibition is produced and circulated by Vox, Centre de l’image contemporaine.

Juan Ortiz-Apuy was born in Costa Rica in 1980 and now lives and works in Montreal since 2003. He has a BFA from Concordia University, Montreal (2008), a Post-graduate diploma from the Glasgow School of Art, Scotland (2009), and a MFA from NSCAD University, Halifax (2011). Ortiz-Apuy often describes his installations as encyclopaedias of sorts that string together ideas and themes seemingly unrelated to each other, like in an erratic web of references, in which at points these sources exchange and come together, and at others they fall apart. Through juxtaposition, assemblage and collage, specific moments, ideas and materials are carefully woven together in these installations through a suggestive network of associations. Drawing from literature, theory, popular culture, design, and art history, he intends in this way to create a system that at one point begins to follow its own logic, vocabulary and energy.

His work has been exhibited across Canada and internationally. Recent exhibitions include The MacLaren Arts Centre, SPOROBOLE Contemporary Art Centre, Gallery Birch Libralato, ARTSPACE, Eastern Edge, A Space Gallery and Quebec City Biennial: Manif d’Art 7. In 2011 he was the recipient of the Halifax Regional Municipality Contemporary Visual Art Award.

His work has been reviewed and published in various magazines, newspapers and books; notable examples include The Brave New Avant Garde by Marc James Léger and reviews in Canadian Art, Le Devoir, The Gazette (Montreal), The Telegram (St. John’s), The Toronto Star, and at MOMUS.ca. Essays about his work can also be found in various catalogues and brochures.

Ortiz-apuy has completed Artist-in-Residency Programs at, among others, the Plug-In Institute of Contemporary Art, Winnipeg (2013), and the Atlantic Centre for the Arts, USA (2014). Upcoming projects include solo exhibitions in Toronto, Calgary and Ottawa, as well as residencies at the Vermont Studio Center and at VSVSVS in Toronto. Ortiz-apuy is represented by Galerie Antoine Ertaskiran.