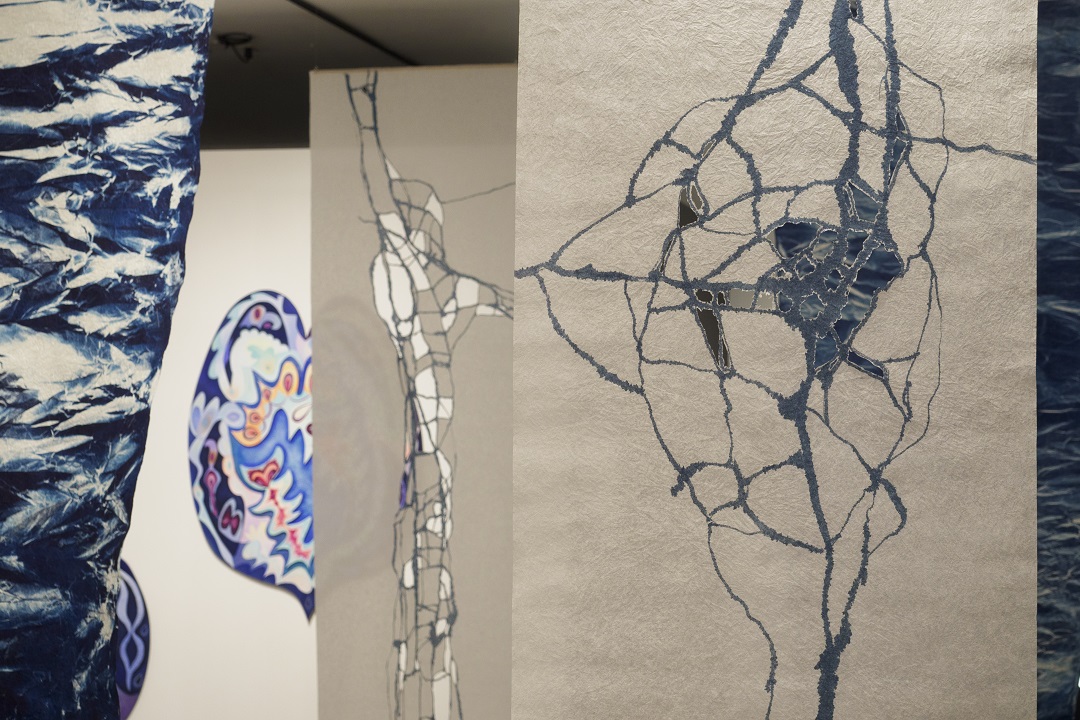 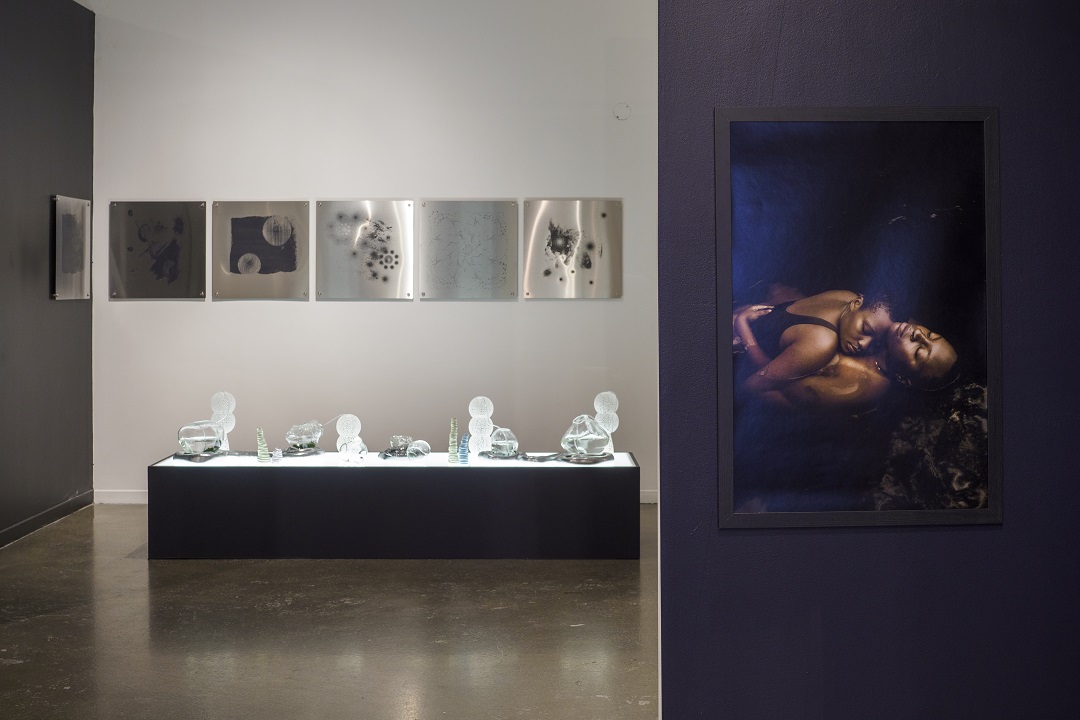 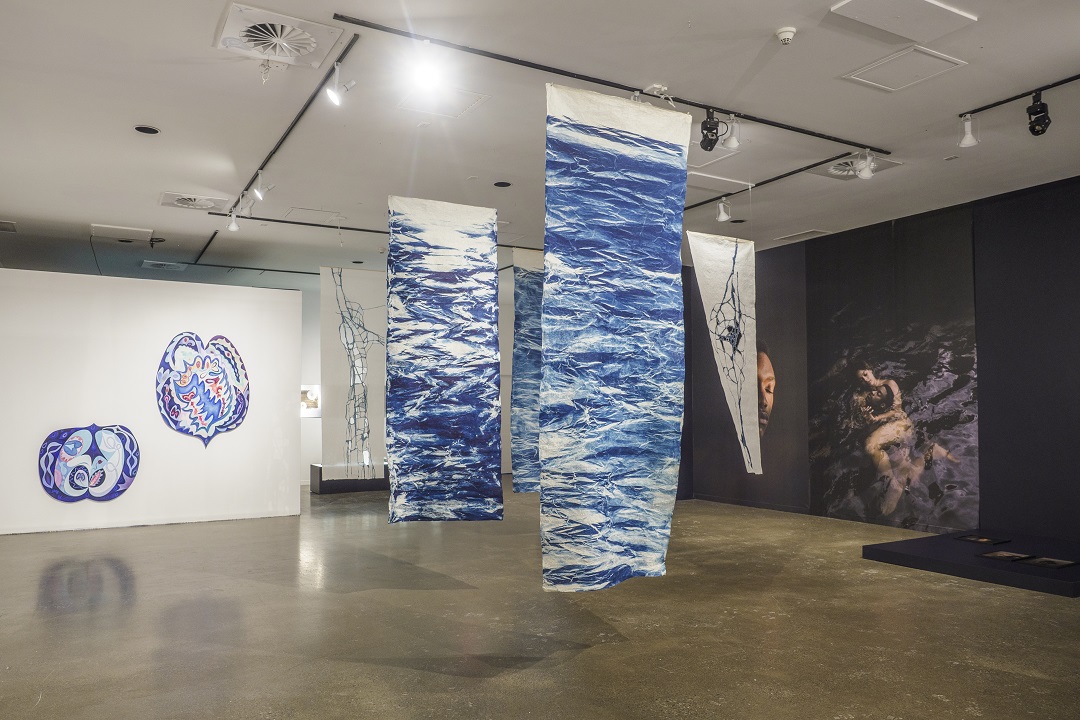 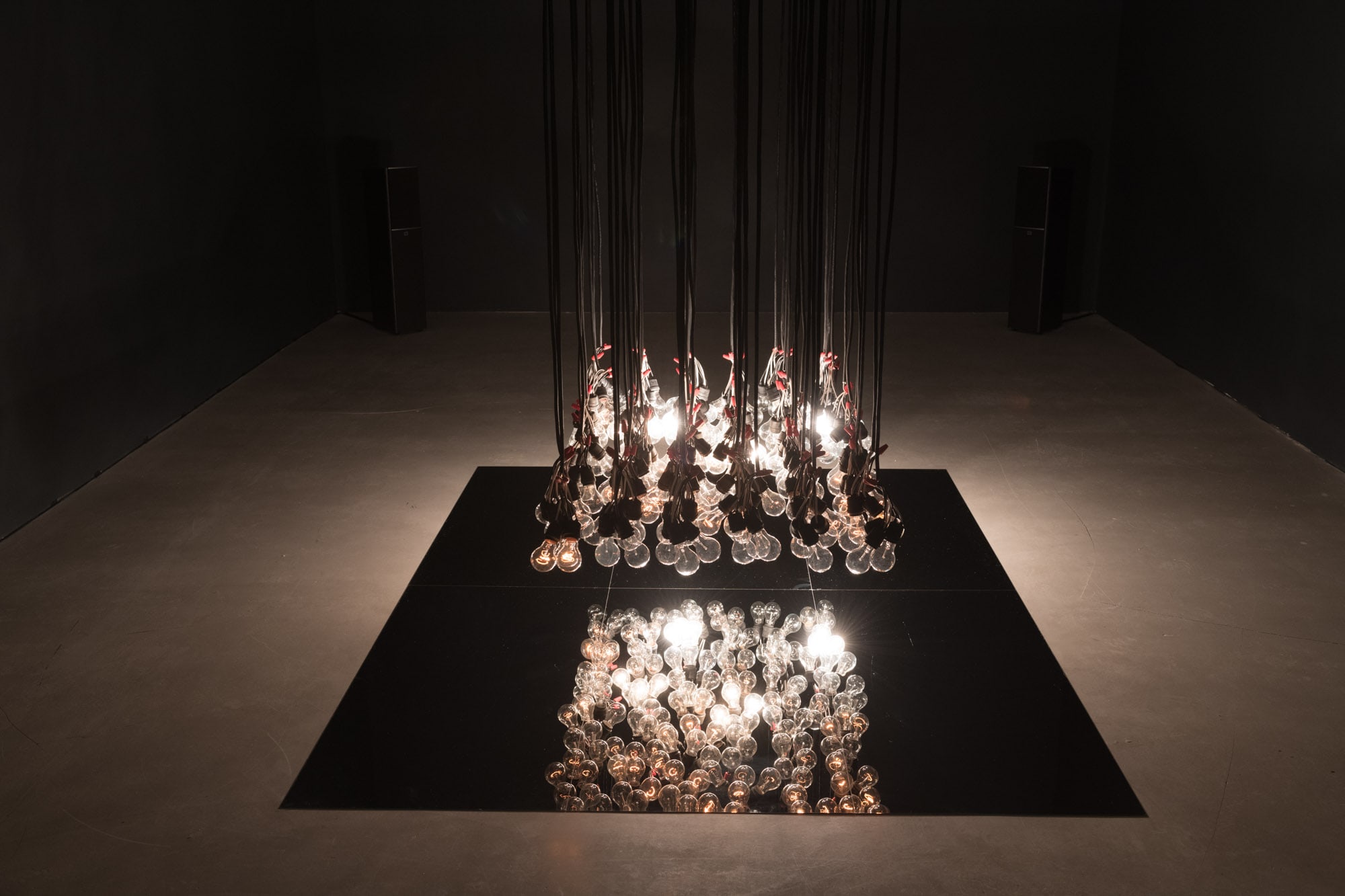 Les yeux dans l’eau looks at human and non-human relationships formed in proximity with water while tapping into a collective fascination with water’s vast connective and mnemonic capacities. Taking place at the Foreman Art Gallery and Sporobole Art Center, both located on the traditional and unceded territory of the Abenaki people at the crossings of the St-Francis, Magog, and Massawippi River, this project contemplates the connections created by and with water. The selected works by Kelly Jaclynn Andres, Maude Deslauriers, Gaëlle Elma, Tania Love, Ludovic Boney & Caroline Monnet demonstrate that water in urbanized spaces is part of a complex arena of interconnected ripples. As water gathers tales of the human experience, it traverses ecosystems, seeps and floods our homes, displaces masses, connects land, flora and fauna, cradles souls and nourishes bodies. Continually folding time and space, water remembers and pulls knowledge for generations to come.

Born in Wendake, a Huron-Wendat settlement, Ludovic Boney goes on to study in Quebec City. Upon graduating from the School of Sculpture in 2002, he co-founds Bloc 5 (an art production workshop) with four fellow artists. While working there, he conceives his first public art projects, some of which are done in collaboration with other artists trained in screen printing, painting, photography, architecture and sculpture. Boney also teaches sculpture at the Maison des métiers d’art de Québec. Since 2015 he is settled in Lévis, where he keeps working on large-scale public art projects, while presenting his work regularly in galleries and artist-run centers. His work was recently shown at Galerie Michel Guimont (Quebec City) and Centre Oboro (Montreal).

Long-listed for the 2017 Sobey Award, he was also a CALQ recipient and received the REVEAL Indigenous Art Award from The Hnatyshyn Foundation. Ludovic Boney is represented by Galerie Michel Guimont in Quebec City.

Maude Deslauriers works and lives in Tiohtià:ke/Montréal, where she is currently completing her master’s in painting and drawing at Concordia University. Her recent work references traditional botanical illustrations in which the specimen has been dissected to reveal microscopic anatomical details. However, as opposed to these images, which essentially bear witness to their subject’s death, Deslauriers’s drawings, paintings and bas-reliefs document an intimate, imagined vision of an interior inhabited by forms that are unmistakably coming to life.

Gaëlle Elma is a Haitian born, self-taught photographer based in Montreal. She finds purpose with being behind the camera, and this path allows her to see the subtle perfection of everyday life. Gaëlle’s work has been exhibited at Dawson College, Never Apart Gallery and featured in The New Yorker magazine.

Tania Love is a Toronto based artist whose work evolves from a relationship to place, materials and connection with nature. She engages in a process centred use of diverse materials including plant based inks and dyes, a casein and pigment based paint as well as cyanotype process. Her choice of materials and the materiality of her work places emphasis on tactility and invites slower rhythms and relationship to natural cycles. A graduate ion Fine Arts from the University of Guelph, she is a recipient of numerous grants, international residencies and exhibitions.

Caroline Monnet (Anishinaabe/French) is a multidisciplinary artist from Outaouais, Quebec. She studied Sociology and Communication at the University of Ottawa (Canada) and the University of Granada (Spain) before pursuing a career in visual arts and films.

Monnet is recipient of the 2021 Hopper Prize, 2020 Pierre-Ayot award, the 2020 Sobey Art Award, the REVEAL Indigenous Art Awards, as well as grants from Canada Council for the Arts, Conseil des arts et des lettres du Québec and from le Conseil des arts de Montréal. She is based in Montreal and represented by Blouin Division Gallery.

Abenaki–Wendat artist, writer, storyteller and illustrator Christine Sioui Wawanoloath was born in 1952 in Wendake, her father’s community. She grew up in Odanak in a family of craftsmen, surrounded by creation and the arts. Later, she attended, the famous Collège Manitou, the first Indigenous post-secondary institution in Quebec, where she studied the arts, photography and history.

Geneviève Wallen is a Tiohtiá:ke/Mooniyang/Montreal and Tkaronto/Toronto-based independent curator, writer, and researcher. She obtained a BFA in Art History at Concordia University (2012) and an MFA in Criticism and Curatorial Practice at OCAD University (2015). Wallen’s practice is informed by intersectional feminism, intergenerational dialogues, and BIPOC healing platforms offering alternatives to neo-liberal definitions of care. Her ongoing curatorial explorations include the practice of gift-giving, carving space for unfinished thoughts, and musings on the intersection of longevity and pleasure.

Wallen contributed essays for C magazine; the anthology Other Places: Reflections on Media Arts in Canada, edited by Deanna Bowen; and the anthology The Politics of Spatial Transgressions in the Arts, edited by Gregory Blair & Noa Bronstein, among others. Wallen is a part-time Exhibition Coordinator at FOFA Gallery; she is also part of the collective YTB (Younger than Beyoncé) Gallery; the co-initiator (with Marsya Maharani) of Souped Up, a series of sporadic and thematic dinners for racialized curators and cultural workers; a member of the Black Curators Forum; an advisory board member of the Centre for the Study of Black Canadian Diaspora, and she recently joined Vie des arts’ editorial committee.