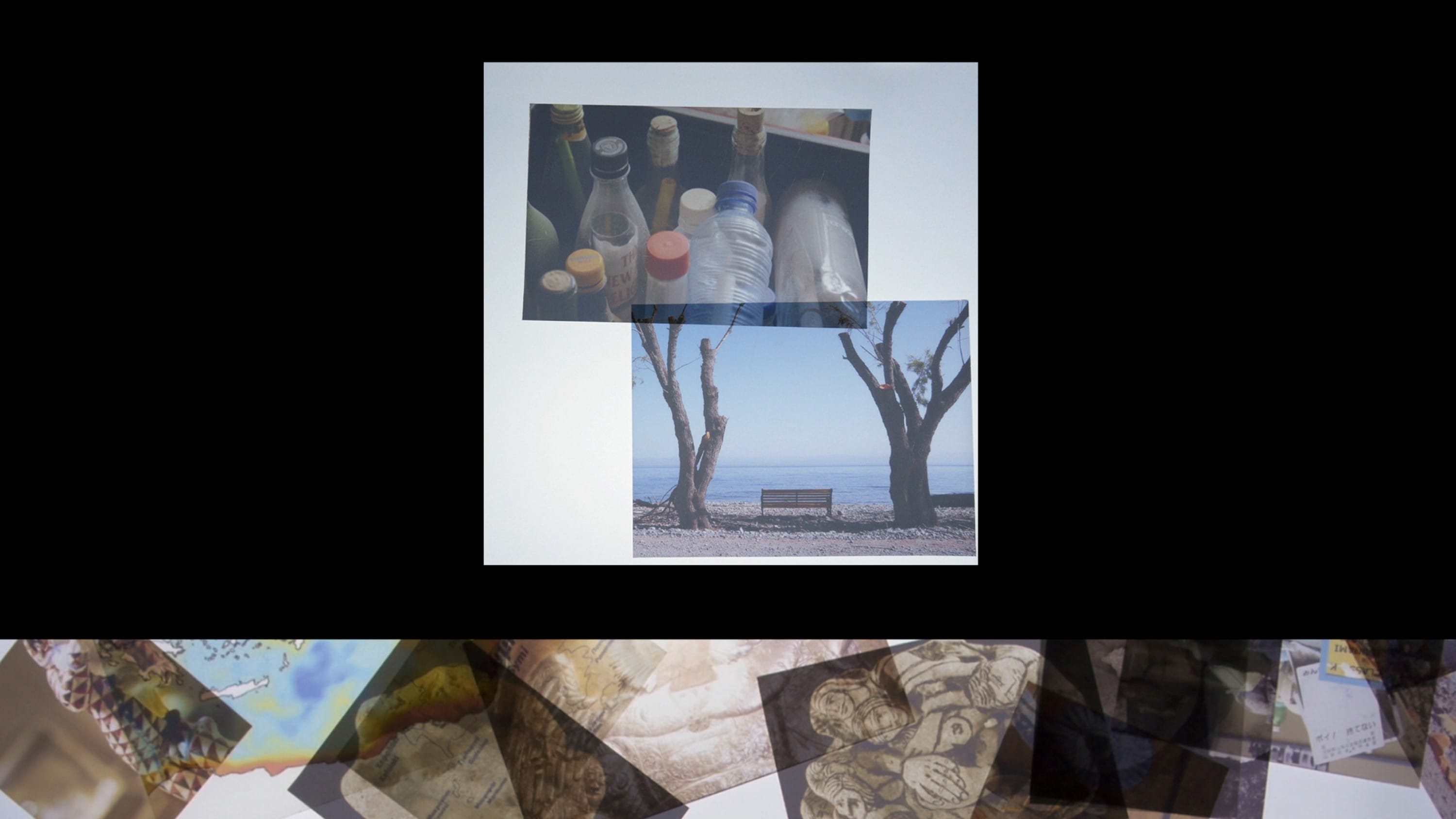 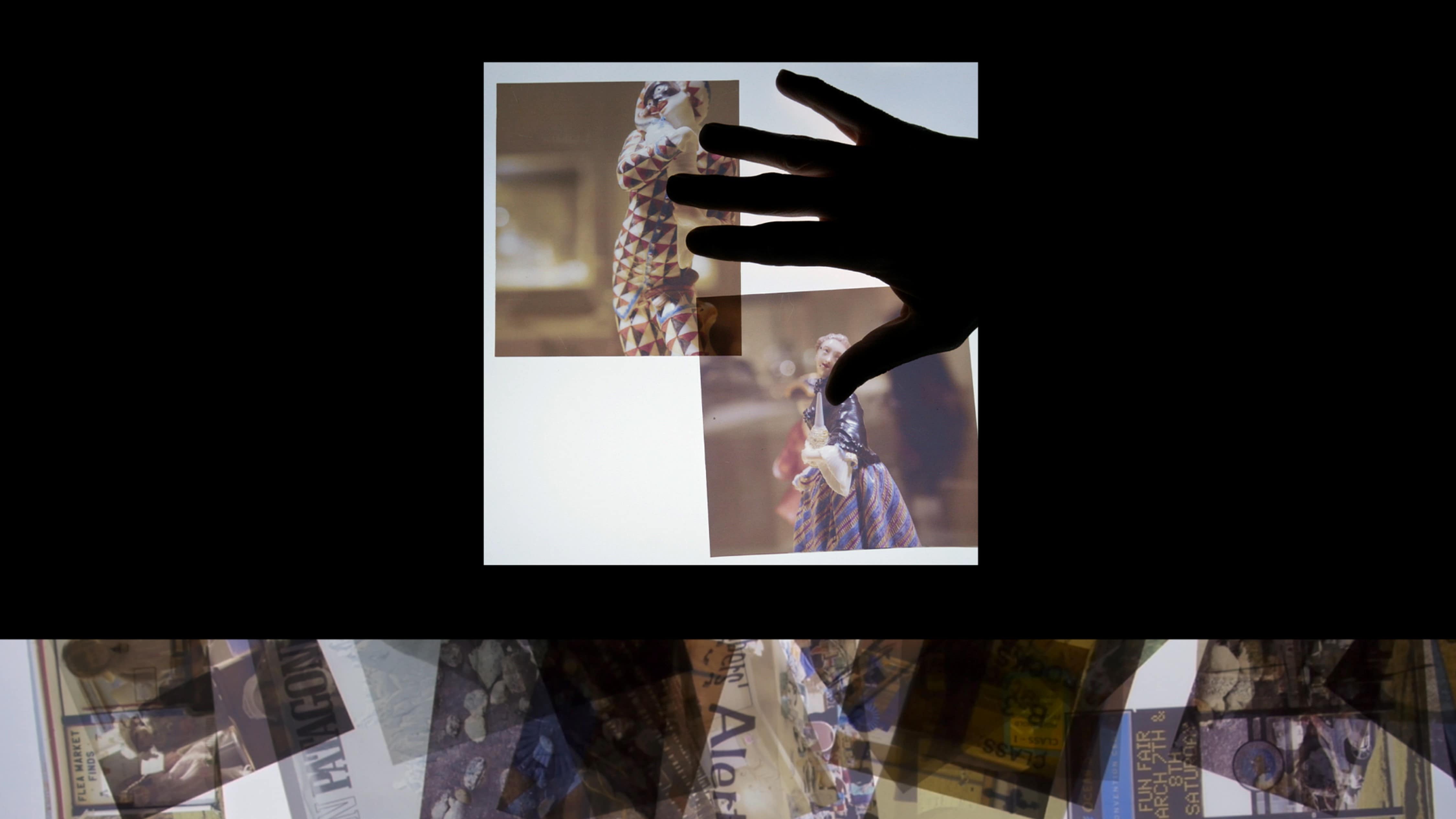 Ellie Ga’s intertextual narratives unfold like constellations. They weave together disparate geographies, fields of knowledge, personal memories and collective tropes, revealing tenuous, unsuspected connections as they meander from one idea to the next. Her distinctly non-linear approach to story-telling allows a peculiar form of stray knowledge: cobbling together photography, film, drawing and orality while navigating disorderly information, competing world views and anecdotal fragments to produce meaning.

Acting as the centerpiece of Ellie Ga’s exhibition at the Foreman Art Gallery, the video installation Gyres is a case in point. Gyres is a series of short videos made up of hundreds of transparent photographs filmed on two light tablets, and a voice-over narrative by the artist which moves through a range of experiences, conversations and geographies. The piece builds up its narrative complexity through the incremental overlaying of images that shift like sediments in water: momentarily stagnating, then moving and being shuffled around.

In oceanography, gyres (gyros, Greek: a circle, a ring) are a combination of winds and currents that produce orbital patterns in the ocean. Debris is often caught in these gyres, and sometimes this debris is released by the gyre and washes up ashore. Through this work, Ellie Ga explores how flotsam can speak of what is left behind and what resurfaces time and time again.

For a period of two weeks, the Foreman Art Gallery presented Strophe, A Turning, a two-channel video installation by Ellie Ga, which is the culmination of over three years of research. As with much of Ga’s work over the past decade, drift is a central focus and unifying theme.

Ga opens the piece with a quote from the Russian poet Osip Mandelstam, who compared launching messages in bottles to the act of writing poems to an unknown reader. The piece then explores the obsession of launching and collecting messages in bottles, including the pilgrimage to the patron saint of messages on the Greek island of Symi. The video installation is structured in separate strophes or verses, each one connected to the next by a shared geography or narrative. As each strophe closes, the screen darkens and a new verse opens on the opposing screen, requiring the viewer to turn and follow the reversals and shifts which have altered the course of the piece. Each turn launches a new facet of the narrative: an imperative change of direction in the story and perspective. On the screen, images are often truncated or blacked out: evidence of the artist’s decision to show or omit material. For Ga there is a deliberate commitment to the act of seeing, or showing, which weighed heavily on her during the making of this piece.

Initially, Ga was interested in how drifting objects have been used to chart sea movement: how accidental drift leads to new discoveries. Ga’s practice centers on her willingness to drift with a current, following uncertain leads and allowing for unexpected turns. In that way, she collects her material like a beachcomber, gathering and indexing messages as they come to her. Ga processes her material following the models of archeologist, linguist, sociologist and poet, always questioning how the artist can bring depth and nuance to those methodologies. Strophe, A Turning wrestles with very real political and humanitarian realities, and contextualizes it conscientiously in a complex history of endurance, faith and chance.

Ellie Ga is a New York-born, Stockholm-based artist whose immersive, wide-ranging investigations include the classification of stains on city sidewalks to the charting of the quotidian in the frozen reaches of the Arctic Ocean. In performances and video installations, Ga’s braided narratives intertwine extensive research with first-hand experiences that often follow uncertain leads and take unexpected turns. She has exhibited and performed internationally at the New Museum, The Kitchen and the Guggenheim Museum in New York, and at M-Museum, Leuven; Le Grand Café, Saint-Nazaire, France; Fondation Cartier pour l’art Contemporain, Paris, among many others.

Ga is the author of Square Octagon Circle (Siglio Press, New York) and Three Arctic Booklets (Ugly Duckling Presse). Ga was a recent recipient of a three-year Swedish Research Council artistic research grant. Her video series Gyres was produced by the Whitney Museum of American Art for the 2019 Whitney Biennial in New York.

Her work is in the public collections of The Solomon R. Guggenheim Museum, New York; the Albright-Knox Museum in Buffalo; FRAC Franche-Comté, Besançon; Fondation Galeries Lafayette, Paris; Hannebauer Collection, Berlin; the Hessel Museum of Art, Bard College, New York and the Whitney Museum of American Art. Ga is a co-founder of the publishing press Ugly Duckling Presse in Brooklyn.

Ellie Ga is represented by Bureau in New York.