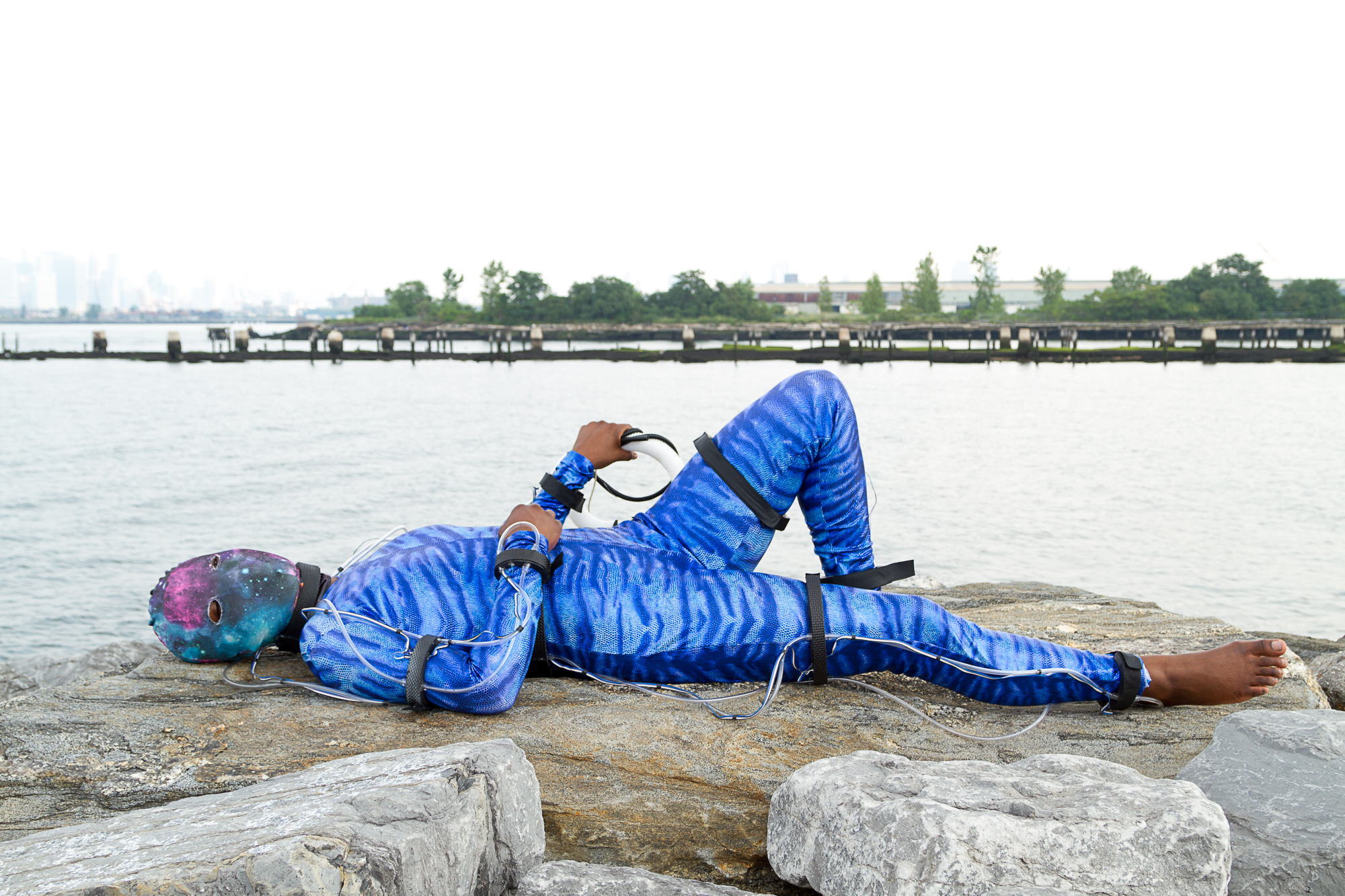 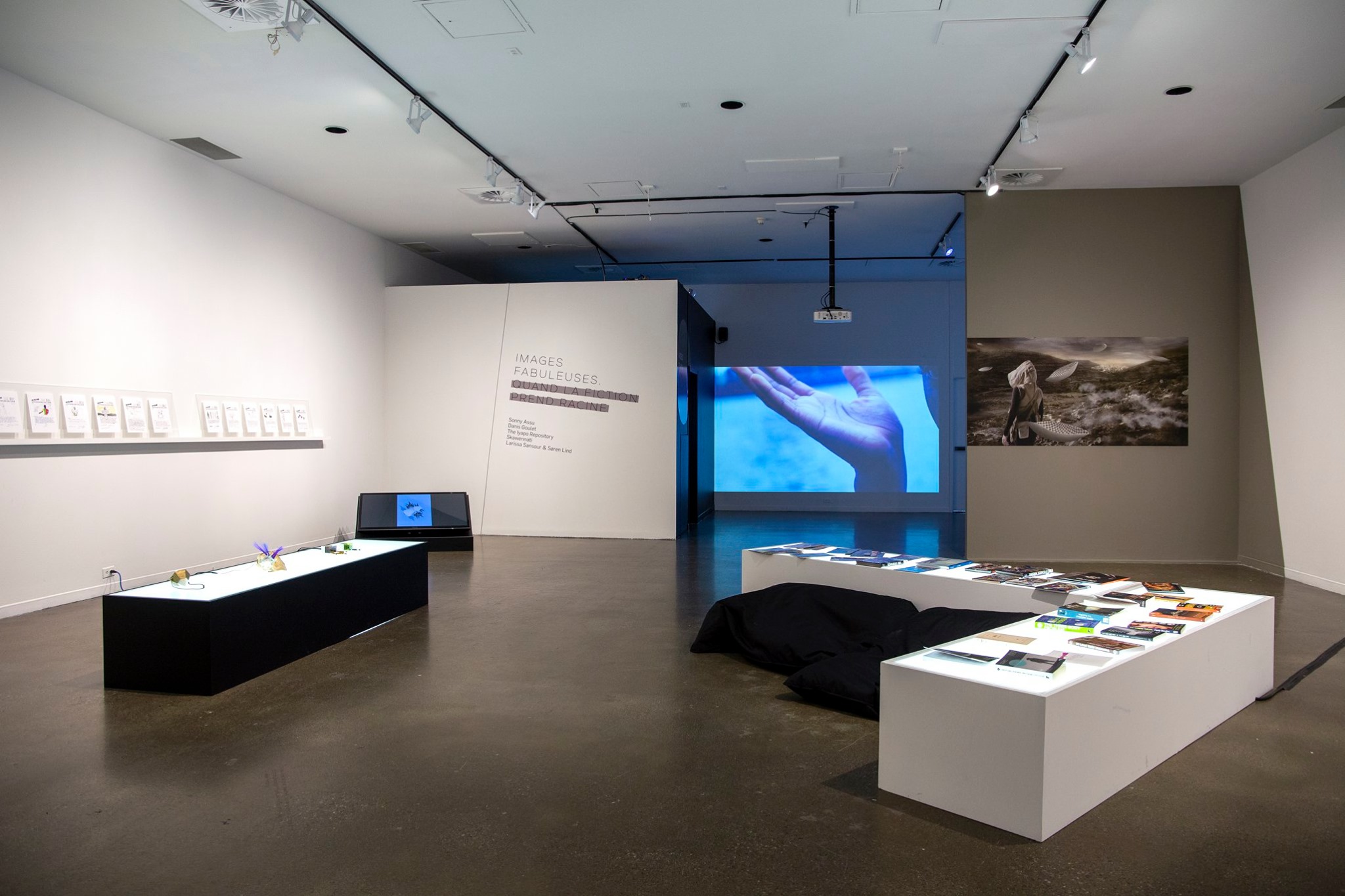 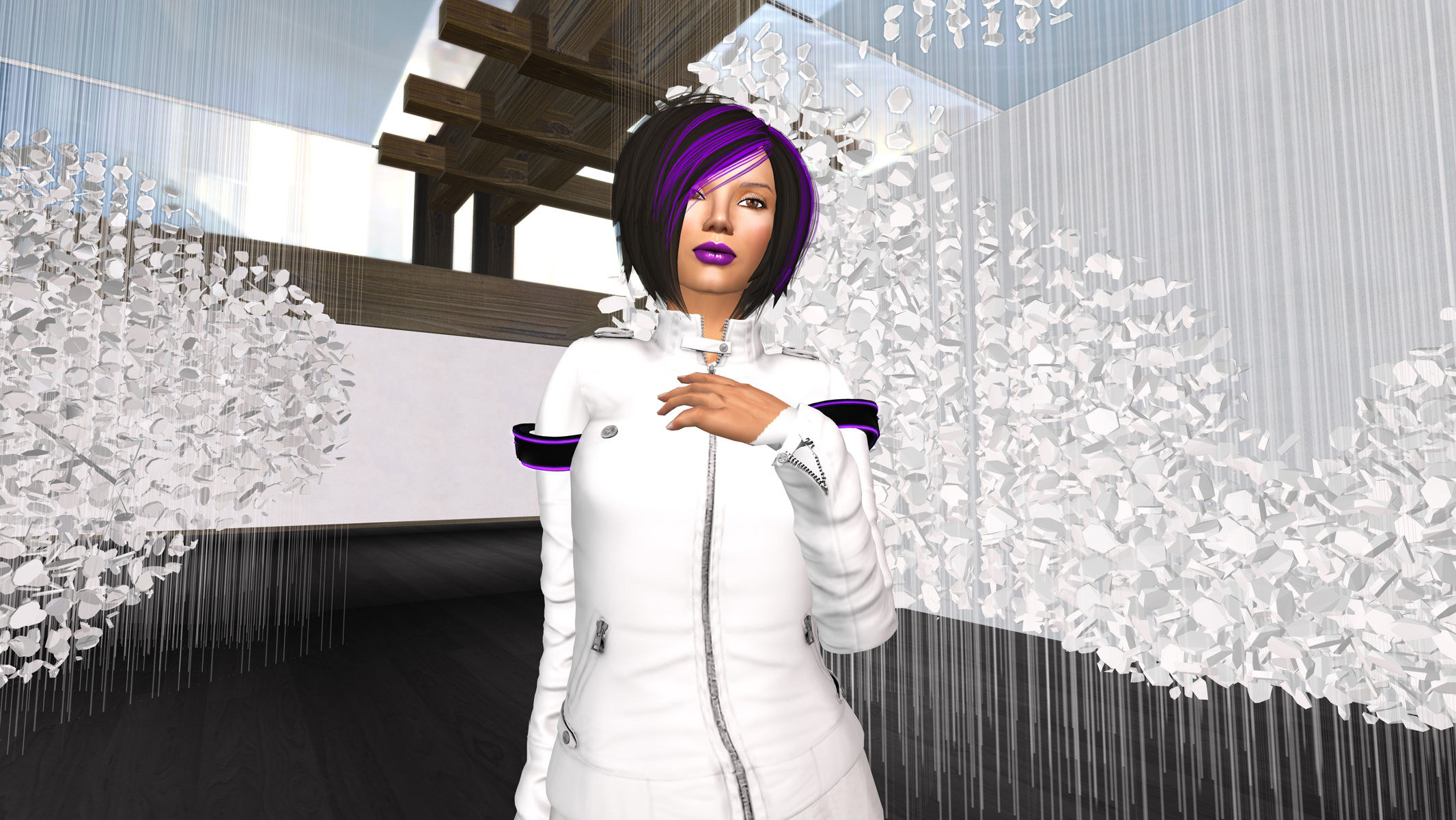 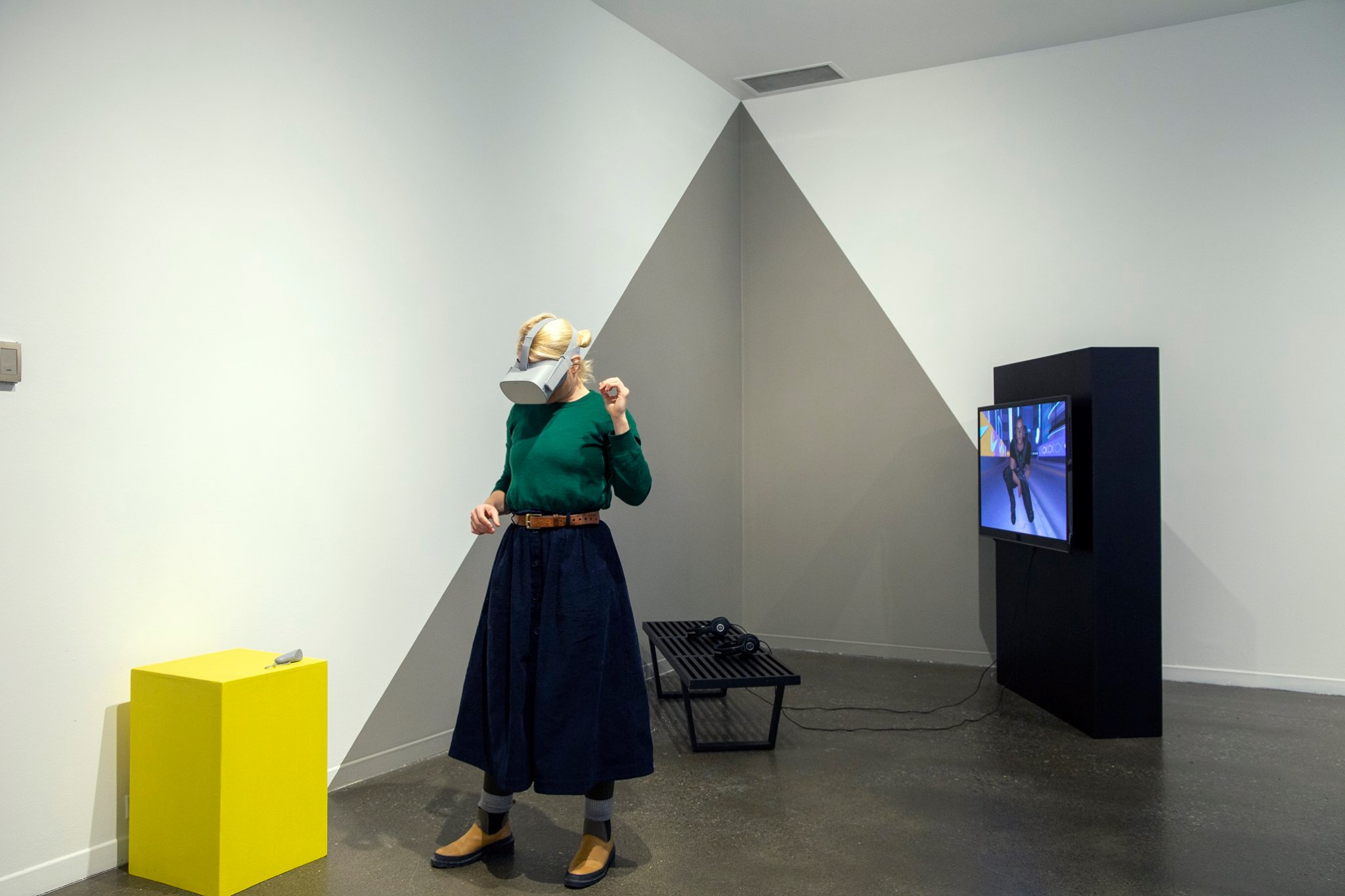 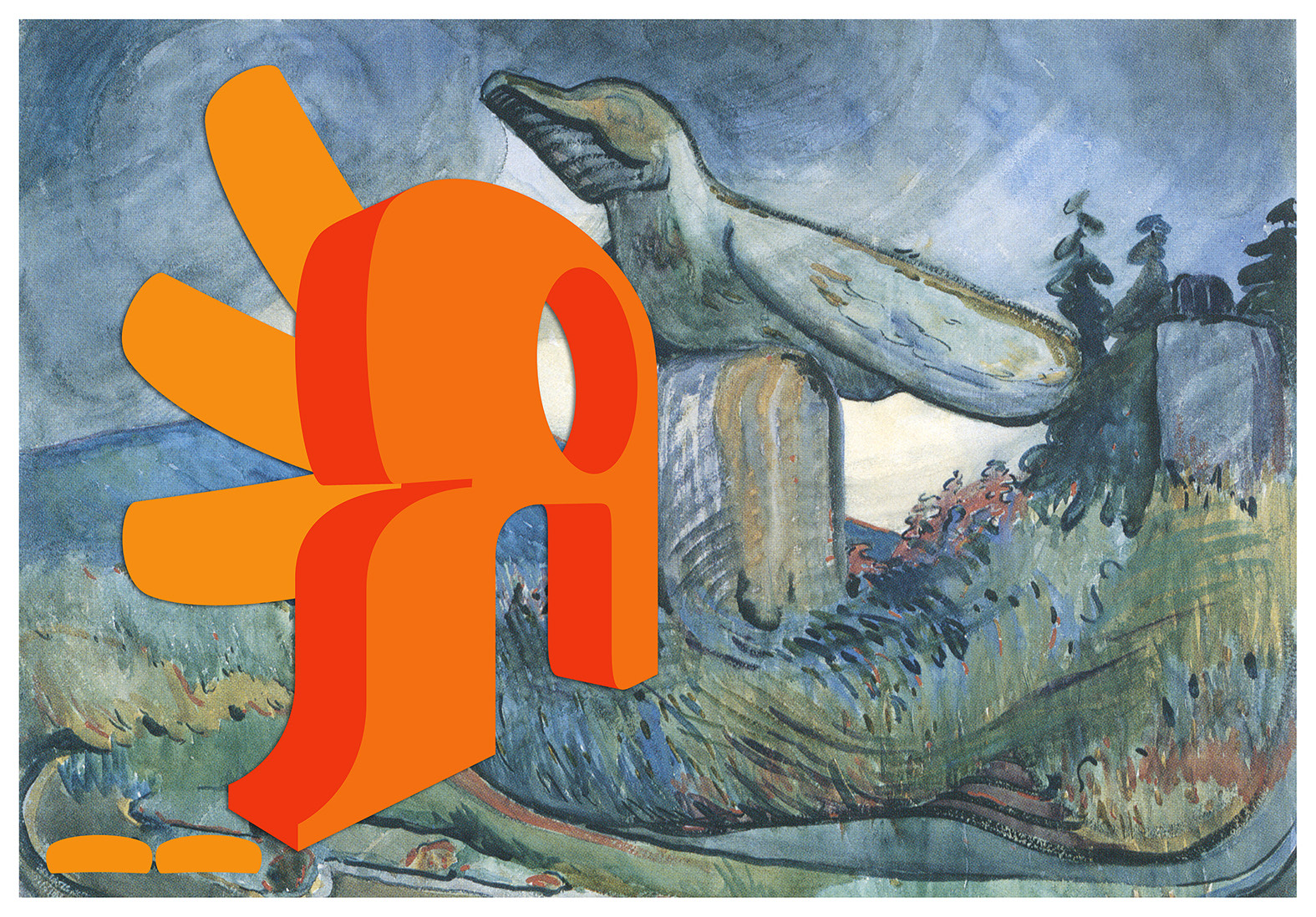 Fabulous Images. When Fiction Takes Root examines the hermeneutical scope of science fiction as a narrative genre in the context of emancipatory discourses that foster ethnocultural diversity. The exhibition features works by Canadian and international artists, novels, posters, popular films, video games and collectibles, all of which are at the juncture of sci-fi and identity politics. Touching on a vast array of representation, from the utopian refuge to the darkest dystopias by way of uchronian narratives and social speculations, Fabulous Images examines how fiction reveals the possibilities of alternative existences.

Co-produced by the Foreman Art Gallery and Sporobole, with the support of the Canada Council for the Arts, the City of Sherbrooke and the Conseil des arts et des lettres du Québec.

The Foreman Art Gallery wishes to thank the artists and the Sporobole Art Centre for their collaboration.

Skawennati makes art that addresses history, the future, and change from her perspective as an urban Kanien’kehá:ka woman and as a cyberpunk avatar. Her early adoption of cyberspace as both a location and a medium for her practice has led to groundbreaking projects such as CyberPowWow and TimeTraveller™. Skawennati is best known for her machinimas—movies made in virtual environments—but also produces still images, textiles and sculpture. Born in Kahnawà:ke Mohawk Territory, Skawennati belongs to the Turtle clan. She holds a BFA from Concordia University in Montreal, where she resides. She is Co-Director, with Jason Edward Lewis, of Aboriginal Territories in Cyberspace (AbTeC), a research-creation network of artists, academics and technologists investigating, creating and critiquing Indigenous virtual environments. They also direct the Skins workshops on Aboriginal Storytelling and Digital Media which aim to empower Indigenous youth to be producers, not just consumers, of video games and related media. In 2015, AbTeC launched IIF, the Initiative for Indigenous Futures. Her works have been presented in Europe, New Zealand, Hawaiʻi, China and across North America in major exhibitions such as “Uchronia I What if ?”, in the HyperPavilion at the 57th Venice Biennale; at B3 Biennale of the Moving Image in Frankfurt, Germany; “Now? Now!” at the Biennale of the Americas; and “Looking Forward (L’Avenir)” at the Montreal Biennale. They are included in the collections of the National Gallery of Canada, the National Bank of Canada and the Musée d’art contemporain de Montréal, among others.

Sonny Assu (Liǥwildaʼx̱w of the Kwakwaka’wakw Nations) was raised in North Delta, BC, over 250 km away from his home ancestral home on Vancouver Island. Having been raised as your everyday average suburbanite, it wasn’t until he was eight years old that he discovered his Liǥwildax̱w/Kwakwaka’wakw heritage. Later in life, this discovery would be the conceptual focal point that helped launch his unique art practice. Assu’s artistic practice is diverse: spanning painting, sculpture, photography, digital art and printmaking. Sonny negotiates Western and Kwakwaka’wakw principles of art making as a means of exploring his family history and the experiences of being an Indigenous person in the colonial state of Canada.

Assu received his BFA from the Emily Carr University in 2002 and was the recipient of their distinguished alumni award in 2006. He received the BC Creative Achievement Award in First Nations art in 2011 and was thrice long-listed for the Sobey Art Award. He received his MFA from Concordia University in 2017 and was one of the Laureates for the 2017 REVEAL – Indigenous Art Awards. His work has been accepted into the National Gallery of Canada, Seattle Art Museum, Vancouver Art Gallery, Museum of Anthropology at UBC, Burke Museum at the University of Washington, Art Gallery of Greater Victoria, Hydro Quebec, Lotto Quebec and in various other public and private collections across Canada, the United States and the UK.

Danis Goulet is a Cree/Métis writer and director. Her award-winning short films have screened at festivals around the world including the Berlin International Film Festival, Sundance Film Festival, Toronto International Film Festival (TIFF), MoMA, imagineNATIVE and Aspen Shortsfest. She is the former Executive and Artistic Director of the imagineNATIVE Film + Media Arts Festival, and currently programs Canadian features for TIFF. She is also an advisor for the Telefilm Canada Indigenous Working Group, a member of the Indigenous Screen Office’s Advisory Circle, and was recently invited to become a member of the Academy of Motion Picture Arts and Sciences (AMPAS). Her feature script Night Raiders has received development funding from the Sundance Institute and was selected for the International Financing Forum at TIFF 2018. Danis is originally from Saskatchewan and now lives in Toronto.

Dance Performance + Documentary Futurism
February 13, 2020 from 5:00 to 9:30 pm
The Foreman Art Gallery and Sporobole Art Centre invite you to a dance performance, followed by a short films screening at La Maison du Cinéma.
Click here for more information.
Opening Reception
Thursday, January 16th, from 5 to 7 pm
The artists and the curators discuss their work with the visitors at 5:30pm on the night of the opening reception.