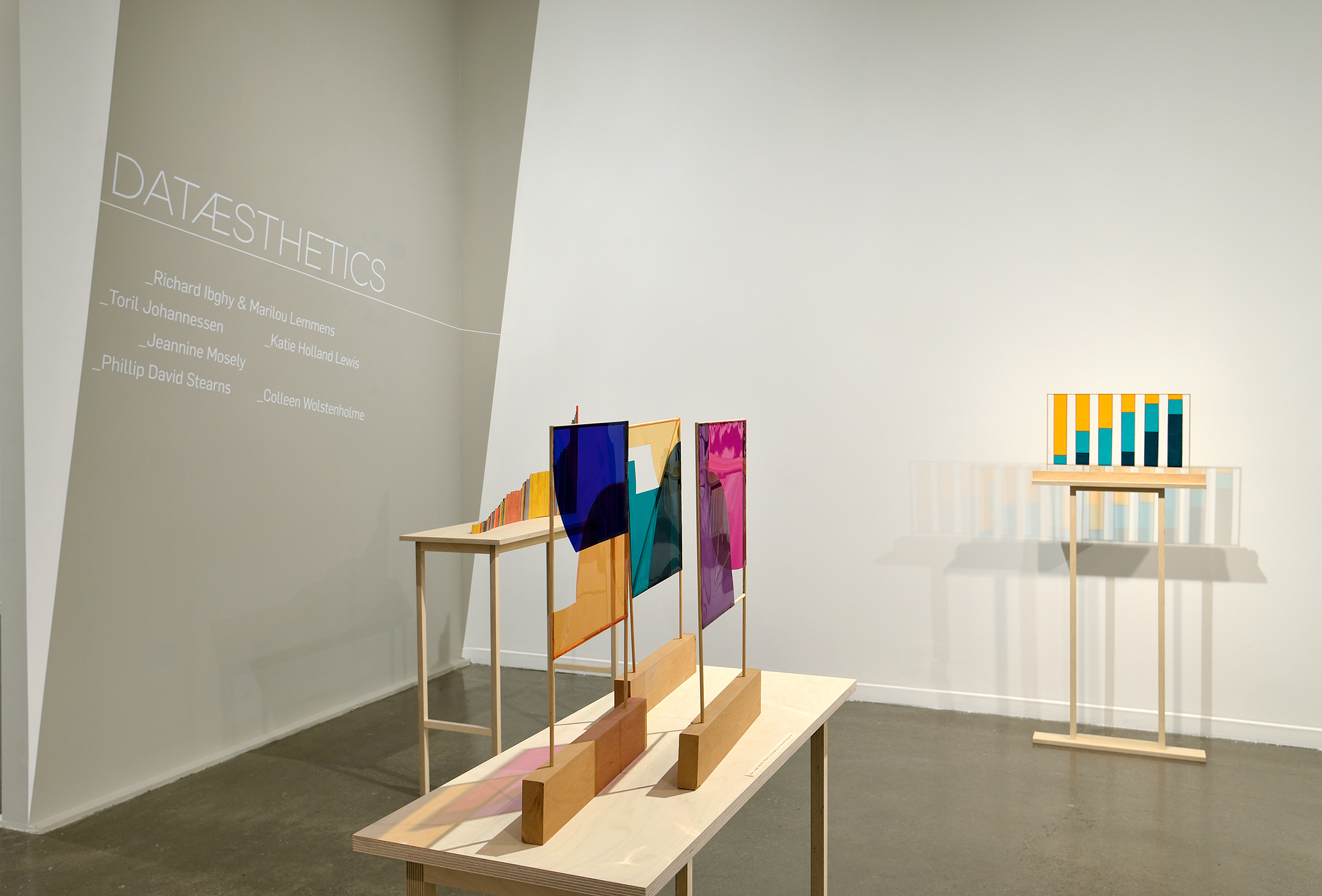 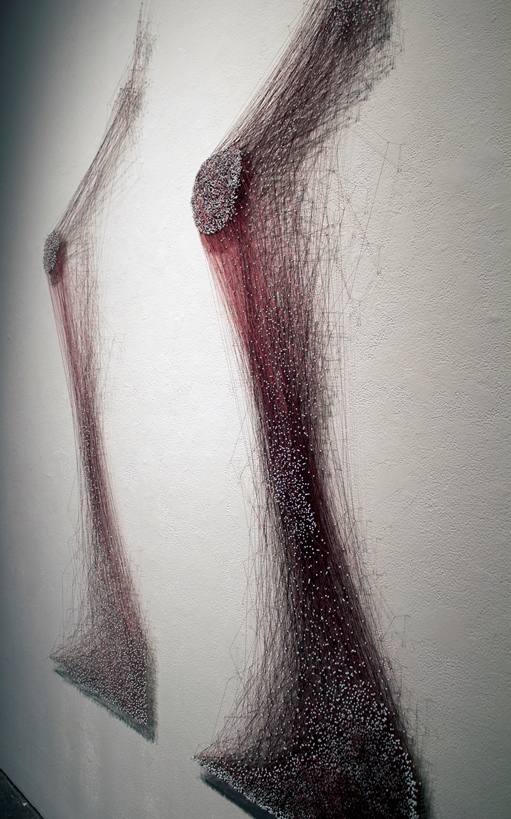 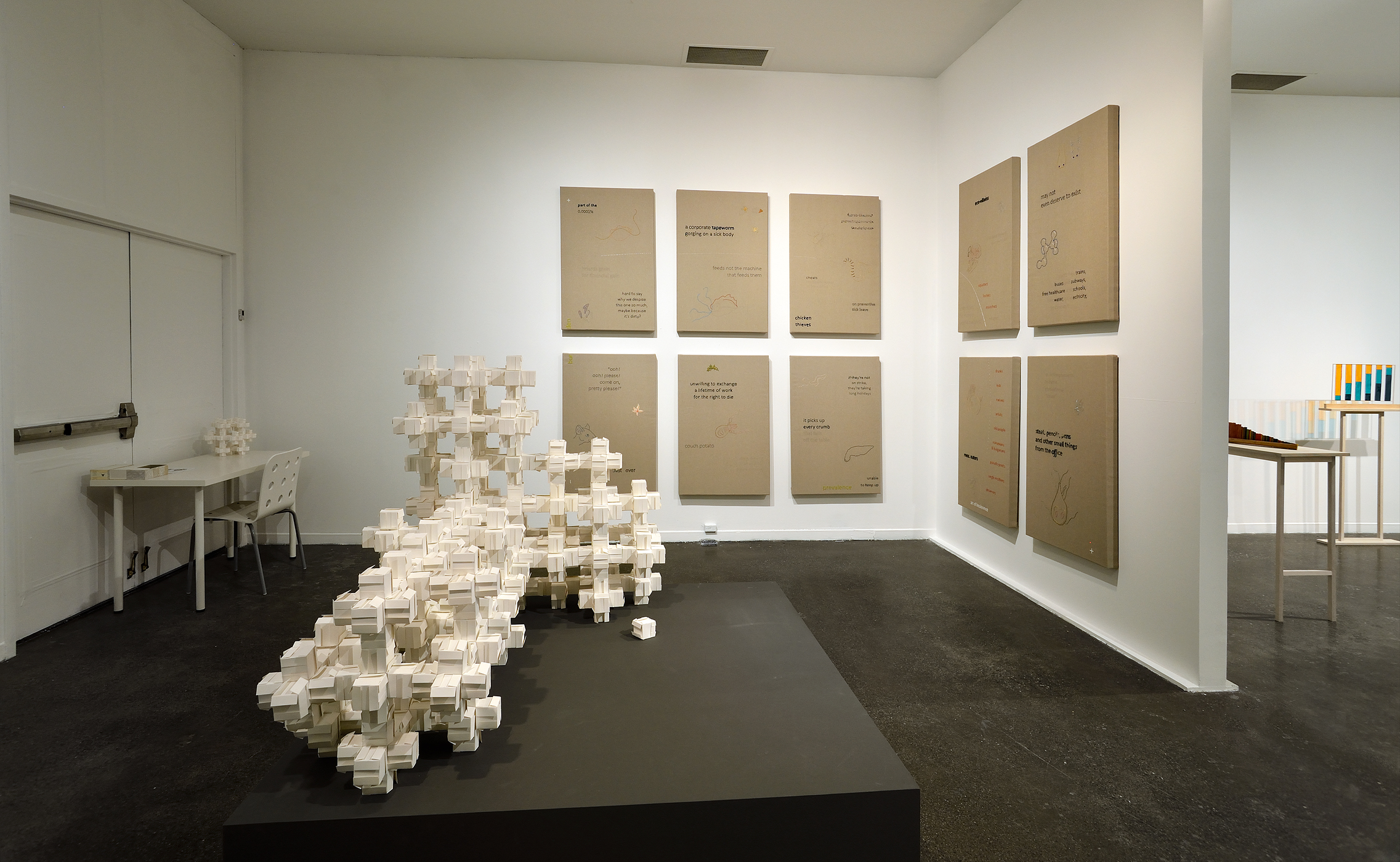 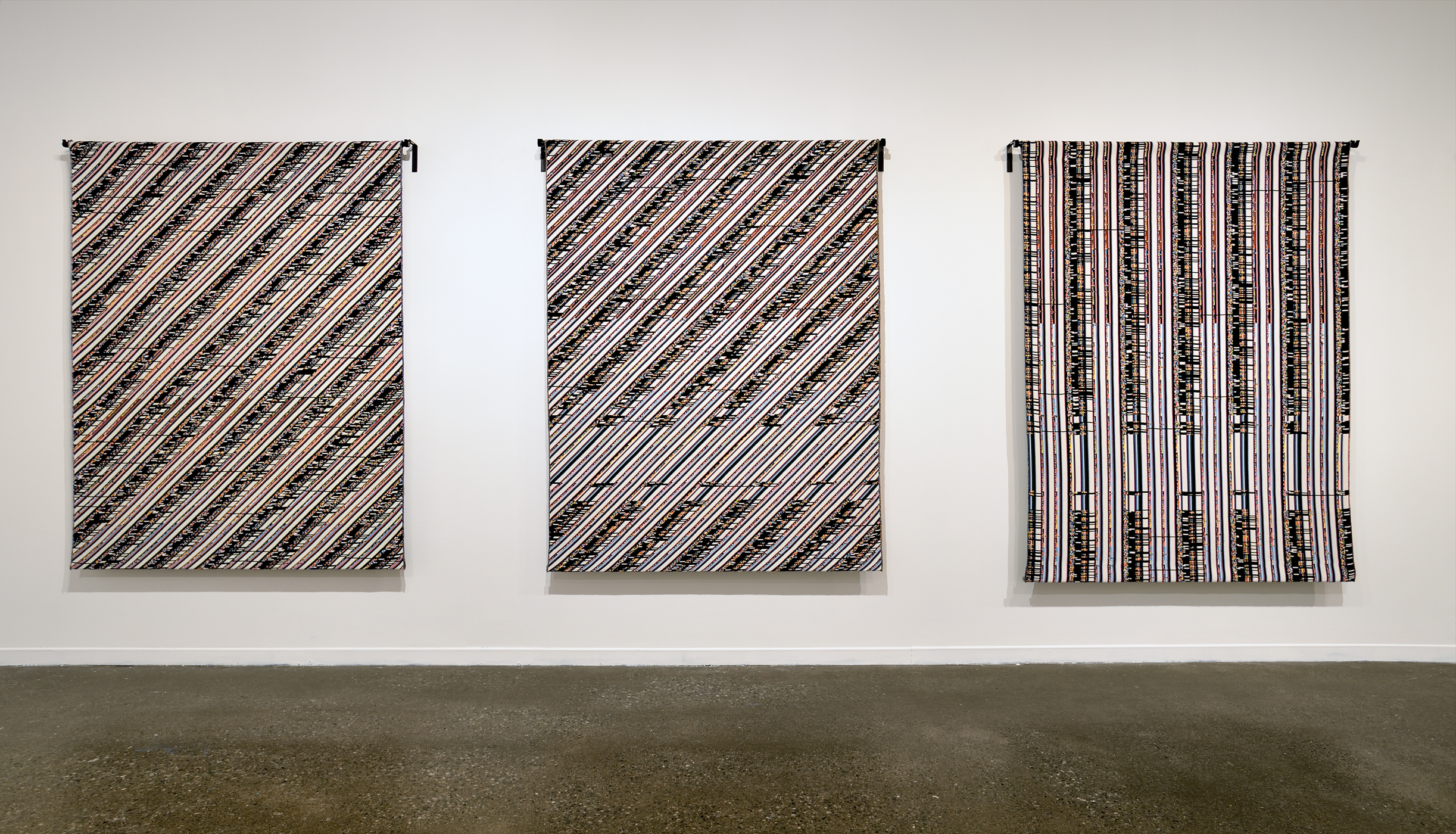 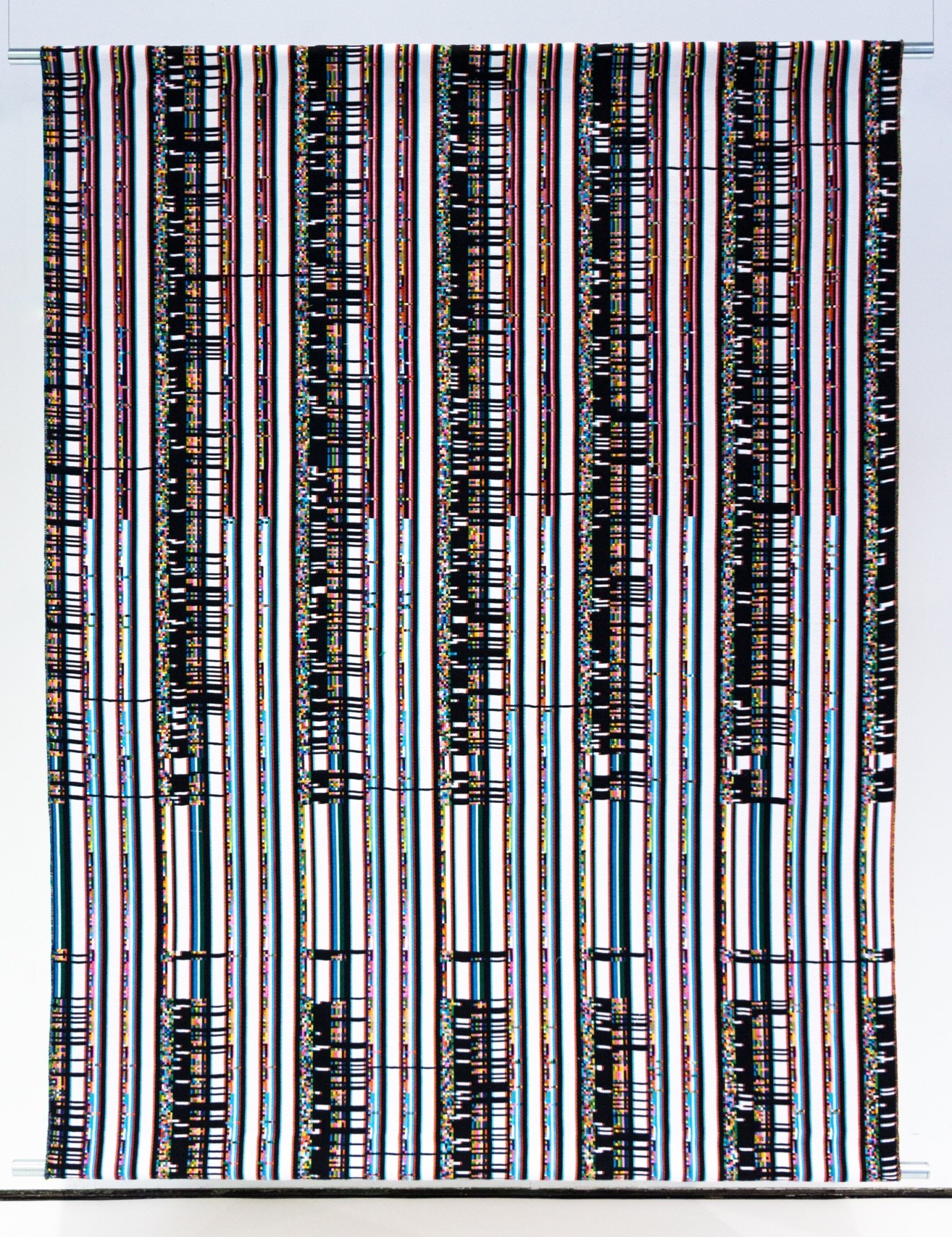 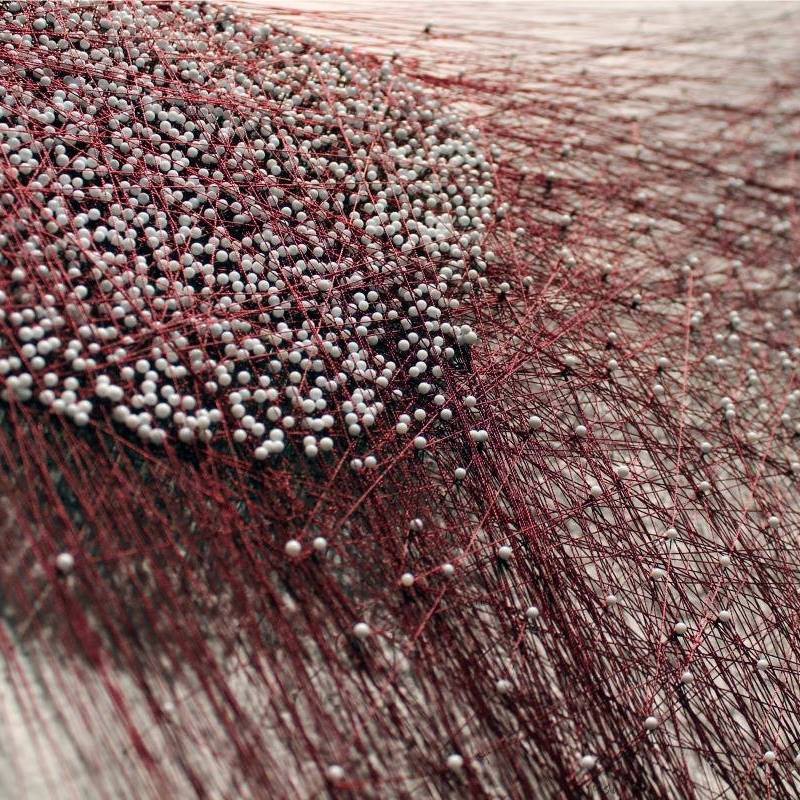 Dataesthetics focuses on a new aesthetic paradigm emerging from the ongoing revolution in data visualization. In a veritable sea of data, where the mathematical sublime as conveyed through Big Data influences how we read the world, graphic designers tasked with schematization become modern-day oracles, enunciators of knowledge and visual rhetoricians. The exhibition presents artists’ epistemological reflections on data collection and processing, the construction of knowledge and the rhetorical power of data visualization. Covering a wide spectrum of approaches ranging from craftsmanship and community art to digital and logarithmic modelling, Dataesthetics looks at the representational techniques developed to make sense of today’s world.

Toril Johannessen is an artist based in Tromsø. Ways of seeing — and not seeing — are recurring themes in Johannessen’s artistic practice. Combining historical records with fiction and her own investigations, her works often has elements of storytelling in visual or written form. Exhibitions include solo shows at The Munch Museum (w/Marjolijn Dijkman), Oslo (2018); ARoS, Aarhus (2017); Trondheim Art Museum, Trondheim (2016); and Museum of Contemporary Art, Oslo (2016), and group shows such as the 13th Dak’Art Bienniale de Dakar (2018); STAGES: Drawing the Curtain, Plug In ICA, Winnipeg (2017); the 13th IstanbulBiennial (2013); Curiosity: Art & the Pleasures of Knowing, Hayward Touring (2013-2104); and Documenta 13 (2012).

Katie Lewis received her BA from Colorado College and her MFA from California College of the Arts. She has exhibited her work nationally and internationally at venues such as the Museum of Modern Art Luxembourg, Museum Rijswijk – The Netherlands, Nevada Museum of Art, Stanford University, San Jose Institute of Contemporary Art, San Francisco State University, Pennsylvania College of Art and Design and the Patricia Sweetow Gallery. In 2016, she was awarded a Joan Mitchell Painters and Sculptors Grant. She has also received grants from the Pollock Krasner Foundation, Sierra Arts Foundation and a residency at the Anderson Ranch Arts Center. She has been included in the publications The Map as Art: Contemporary Artists Explore Cartography and Cartographies of Time both published by Princeton Architectural Press.

Jeannine Mosely (born May 16, 1953, Pittsburgh, PA) holds a Ph.D. in electrical engineering and computer science from the Massachusetts Institute of Technology, and is known for her work as an origami artist. She is best known for her modular origami designs, especially her work using business cards. She has organized several crowd-sourced origami projects built from tens of thousands of business cards involving hundreds of volunteers for each project. Her work was presented at the Institute For Figuring (IFF), an organization based in Los Angeles, California that promotes the public understanding of the poetic and aesthetic dimensions of science, mathematics and the technical arts.

Phillip David Stearns is an artist and designer living in Brooklyn, NY.His practice involves the use of a wide range of electronic technologies and media to address the many roles technology plays in contemporary society. Deconstruction, reconfiguration, and extension are key methodologies and techniques employed in the production of works that range from audio visual performances, electronic sculptures, light and sound installation, digital textiles, and other oddities both digital and material. He received his MFA in music composition and integrated media from the California Institute of Arts in 2007 and his BS in music technology from the University of Colorado at Denver in 2005. He is a member of NEW INC’s 5th year cohort.

Colleen Wolstenholme works in a range of mediums including jewelry, drawing, painting, sculpture, embroidery, and digital collage. Through systematic formal approaches, she tries to evoke objects and systems that are invisible to the naked eye, yet have huge influence on our lives. She uses fluid sets of rules to set up a situation whereby she can complete a work’s form in a way that enables production to flow. The formal organization that ensues is a result of negotiating with potential. It is a process of unfolding where variance from a norm causes the intricate characteristics of the form. Colleen Wolstenholme received a Bachelor of Fine Art in 1986 from the Nova Scotia College of Art and Design in Halifax and a Master of Fine Art in 1992 from the State University of New York, The College at New Paltz.

Maryclare Macissac, Dataesthetics: the First Time I’ve Loved Numbers Since I Dropped Out of Business, The Campus, Vol. 74, No.8. January 31, 2019. p.8