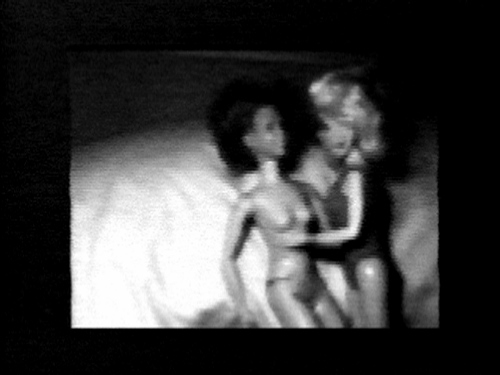 In the video Jollies, the artist produces an autobiographical narrative of her adolescent sexuality, first crushes and kisses, as she recalls coming out as a lesbian during her teen years. Taken with a Pixelvision toy camera, the video features a mix of music, scrawled diary entries and Barbie Dolls enacting several disjointed scenes that reference the artist’s anxiety about her sexuality and the challenges of growing into adulthood.

Born in 1973, Sadie Benning is an American multimedia artist and musician best known for her innovative video work from the early 90s and for founding the feminist post-punk band Le Tigre. At 15, she began creating video works using a Fischer Price Pixelvision camera, which she used to record pixelated black-and-white images onto standard audio cassettes. Using a combination of handwriting, cut up music and experiential narrative, these early videos explore themes of gender, sexuality and the challenge of growing up. In 1997, Benning received her MFA from Milton Avery School of the Arts at Bard College in Hudson New York. She has held solo exhibitions worldwide at various institutions, such as the Whitney Museum of American Art in New York (2009), Power Plant Gallery in Toronto (2008) and Gwangju Biennale in Korea (2008). Her recent group exhibitions include New York Experimental Jet Set, Trash and No Star at the New Museum in New York (2013), The 56th Carnegie International at the Carnegie Museum of Art in Pittsburgh (2013), and Building Identities at the Tate Modern in London, UK (2004). Benning has received grants and fellowships from Guggenheim Foundation, Andrea Frank Foundation, National Endowment of the Arts, and Rockefeller Foundation. Awards include Wexner Center Residency Award in Media Arts, National Alliance for Media Arts and Culture Merit Award and the Grande VideoKunst Prize. Her work can be found in many private and public collections such as the Museum of Modern Art, Fogg Art Musuem and Walker Art Center.