VIDEOTANK #19: THE COLLAPSE OF PAL 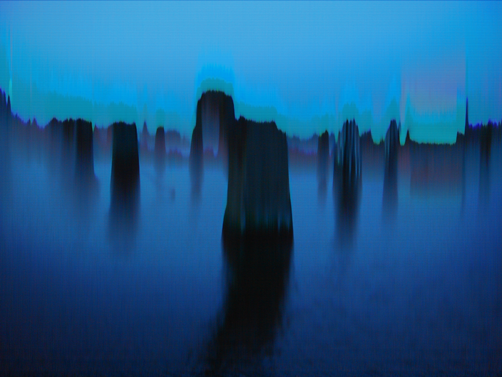 In The Collapse of PAL, the Angel of History (Walter Benjamin) reflects on the PAL signal (Phase Alternating Line—a color encoding system for analogue television) and its termination. This death sentence, although executed in silence, was a brutally violent act that left PAL disregarded and obsolete. While it might be argued that the PAL signal is dead, it still exists as a trace left upon the new, ‘better’ digital technologies. PAL can, even though the technology is terminated, be found here as a historical form that newer technologies build upon, inherit or have appropriated from. Besides this, the Angel also realizes that the new DVB (Digital Video Broadcasting) signal that has been chosen over PAL is different, but at the same time also inherently flawed as PAL.

The Collapse of PAL is the digital version of a live audio visual performance first performed on national Danish television and afterward realized at oa. Transmediale (Germany) and Nova festival (Brasil).

Rosa Menkman is a Dutch artist, curator and researcher. Her work focuses on noise artifacts that result from accidents in both analogue and digital media. She investigates video compression, feedback, and glitches, using her exploration to generate art works.

In 2011 Menkman wrote the Glitch Moment/um, a little book on the exploitation and popularization of glitch artifacts (published by the Institute of Network Cultures), co-facilitated the GLI.TC/H festivals in both Chicago and Amsterdam and curated the Aesthetics symposium of Transmediale 2012. She was part of the curatorial team of Sonic Acts (2016-2017). Since 2012 Menkman has been curating exhibitions that intend to illuminate the different ecologies of glitch (filtering failure, glitch genealogies, glitch moment/ums and Tactical ᴳlitches – the latter one together with Nick Briz. Since 2018 Menkman is Vertretungsprofessur Neue Medien | Visuelle Kommunikation at the Kunsthochschule Kassel.

Produced by the Foreman Art Gallery with the support of the Canada Council for the Arts, the City of Sherbrooke and the Conseil des arts et des lettres du Québec..