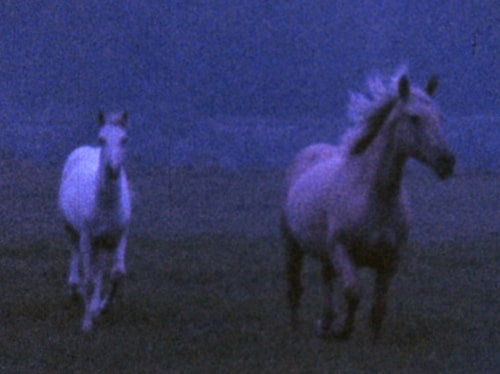 Inspired by a speech given by former Canadian Prime Minister Pierre Elliott Trudeau, the feature-length film Reason over Passion / La raison avant la passion (1967-69) is a cross-country travelogue, political satire, modernist experiment and one of Joyce Wieland‘s most renowned experimental films. It also embodies many of the themes recurrent in her rich, diverse and extensive portfolio, which uses various media. The film interrogates Canadian identity by way of its territory and its political culture. While Canadian landscapes shot from the cabin of a travelling vehicle pass by in a continuous stream, computer generated shuffles of the title scroll at the bottom of the image, dissolving the original meaning in a sea of permutations. In the interstices of language and territory, alternative interpretations of the Nation are allowed to bloom.

Joyce Wieland (1930 – 1998) is a Canadian experimental filmmaker and mixed media artist, and she is considered to be a central figure in Canadian art during the 1960s and 1970s. Though she began her career as a painter, her work came to explore a wide range of materials and media, and she is best known as an experimental filmmaker whose work challenged and bridged boundaries among avant-garde film factions of her time. Her works introduce a kind of manual manipulation of the filmstrip that inscribe an explicitly female craft tradition into her films while also playing with the facticity of photographed images. As both a gallery artist and a filmmaker, Wieland was able to cross over between those realms and to garner attention and support in both.