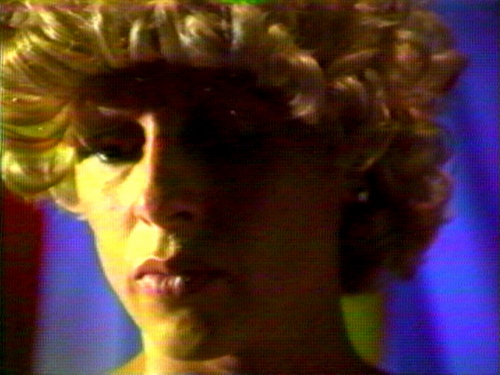 The Amazing Bow Wow is the only Benglis video work with a discernable plot that tells the tragic adventure of a talking hermaphroditic dog named Bow Wow. Bow Wow performs in a carnival freak show and is owned by two carnival producers named Rexina and Babu, who attempt to use the dog’s sideshow act to make a fortune. The relationship between the dog and its owners becomes strained as they discover the Bow Wow’s extraordinary ability of speech and high intelligence, which provokes affection, and eventually a sexual relationship with Rexina, while inciting jealousy in Babu. Babu’s envy of the relationship between Rexina and Bow Wow ultimately causes her to attempt to castrate the dog one night, but accidentally cuts of his tongue instead. The dog’s head becomes grotesque and skeletal, destroying the pair’s dream of making a fortune with Bow Wow’s carnival act.

In The Amazing Bow Wow, Benglis parodies the traditional Oedipal complex, commenting on the moral position of talent (including artists) in society and how those with talent are often exploited. This foundational feminist video work also questions notions of gender and sexuality, proposing a more open-ended approach to sexual identity and gender definitions.

Born in 1941 in Louisiana, Lynda Benglis has been a practising artist for over four decades, primarily in sculpture. In her early career, Benglis was a pioneer of feminist video art, introducing self-representation, sexuality, the gaze and female identity to the male-dominated genre of video art at the time. She is perhaps most famous for the notorious advertisement she placed in Artforum magazine in 1974, in which she posed wearing only a pair of sunglasses and a strategically placed dildo. In 1964, Benglis earned a BFA from Newcomb College, which was then the women’s college of New Orleans. Since the early 1970s, she has held solo exhibitions at Cheim & Reid in New York, Texas Gallery in Houston, Locks Gallery in Philadelphia, the Irish Museum of Modern Art in Dublin, Ireland, the New Museum in New York, and the Karpathos Gallery in Athens, Greece.

Benglis has also participated in international group exhibitions such as Arte Provera and anti-Form at the Tate Modern in London, UK, Multiplex: Directions in Art: 1970 to Now at the Museum of Modern Art in New York (2007) and WACK! Art and the Feminist Revolution, which travelled between 2007 and 2009 to institutions such as the Museum of Contemporary Art in Los Angeles, the National Women’s Museum in Washington, D.C. and the Vancouver Art Gallery in Vancouver, Canada. Since the 1960s, Benglis has received many awards, including the National Endowment for the Arts, a Guggenheim Fellowship and an Honorary Doctorate from Kansas City Art Institute. Her work can be found in many public collections such as National Gallery of Victoria, Australia; Museum of Modern Art, New York; Solomon R. Guggenheim Museum, New York; and Tate Modern, London, UK. Benglis is currently represented Cheim & Reid in New York, where she currently lives and works.