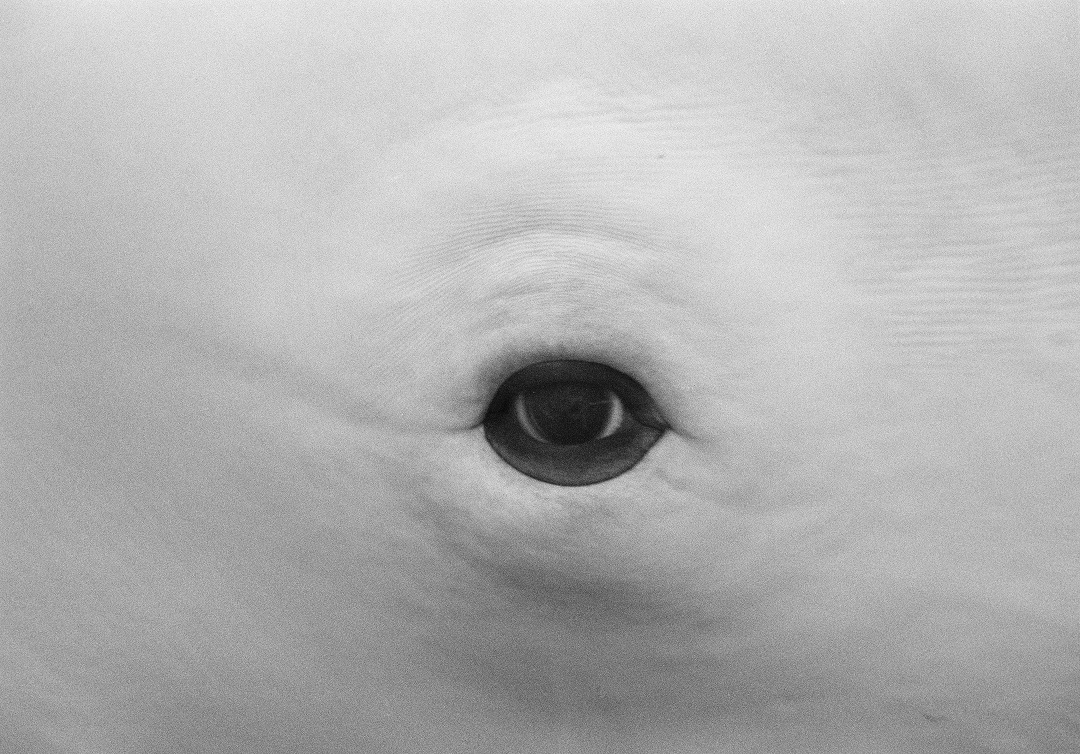 For the last ten years, Maryse Goudreau has turned her attention to the beluga by consecrating an archive of work to the animal. Committed to accompanying the beluga during its slow decline over a period of at least twenty years, the Gaspesian artist has created a series of photographic, sound, literary and sculptural works that cast an empathic gaze on the species, a sentinel of climate change in the North. At the invitation of curator Noémie Fortin, she revisits this corpus with the eyes of a child to create immersive works where birth and extinction coexist, drawing on her lifelong love for the animal to feel her way through a mixture of hope and mourning.

Dans l’œil du béluga, her exhibition for young audiences, uses installations involving listening, touch and play as a means of restoring the animistic thinking that characterizes childhood. Goudreau’s ecofeminist approach points up the importance of inter‑species connection, presenting the concept of mothering as the antidote to the destruction of the land and the beings who inhabit it, and calling on us to develop a sense of caring for all living things that extends beyond what is merely human. In this, she builds a sanctuary devoted to the animal and employs images of tenderness such as a beluga nursery as well as whale song listening circles, in order to spark the kind of curiosity needed to transform the world to come. Inviting us to immerse ourselves in the world of the cetacean, see ourselves reflected in our encounters with the marine mammal and those who protect it so as to better grasp the impact of its imminent extinction, Dans l’œil du béluga pushes us to change our perspective and see the world through the eyes of a beluga.

Since 2012, she has been working on an archive dedicated to the beluga whale: an ongoing, open-ended research/art project for which she has assembled data and creative works made over the past two decades. Goudreau is invested in socially conscious art-making, with several participatory projects in the Gaspé region, where she lives, including Manifestation pour la mémoire des quais and Festival du tank d’Escuminac (first and last edition).

She has most recently shown at MOMENTA Biennale de l’image (Montreal, 2021), the Venice Biennale (Montreal PHI Centre Pavilion, 2019), Dazibao (Montréal), Le Museo de la Cancilleria/Instituto Matias Romero (Mexico), Centro de Arte Contemporáneo Wifredo Lam (Havana, Cuba) and the Montreal Museum of Fine Arts. She has been the recipient of various awards, including the Lynne Cohen Award (2017) in partnership with the Musée national des beaux-arts du Québec. Her works feature in several collections, including at the Montreal Museum of Fine Arts.

An independent curator, author and cultural worker, Noémie Fortin is originally from Lac-Mégantic and based in the Eastern Townships.
In the process of completing her Master’s degree in Art History at Concordia University, her research focuses on ecological art that moves outside of institutions to engage with territories and communities. She pays particular attention to projects carried out in rural places, which serve as fertile ground for addressing environmental issues in a situated manner.

Since 2017, her curatorial projects have been primarily rooted at the Foreman Art Gallery of Bishop’s University, as well as at the 3e Impérial, centre d’essai en art actuel. Her writings have been published in a number of specialized publications, including Esse arts + opinion, Vie des Arts, Ciel variable, and The Goose: A Journal of Arts, Environment, and Culture in Canada. As a cultural worker, she contributed to the establishment of the Grantham Foundation for the Arts and the Environment‘s educational program before carrying out the mission of the Foreman Art Gallery’s Community Art Lab (ArtLab).

Back to Upcoming Programming